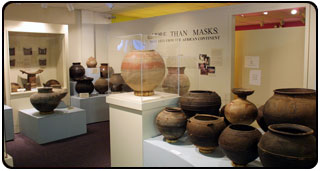 Wake Forest University’s Museum of Anthropology will open two exhibits—“More Than Masks: Objects of Daily Life from the African Continent” and “Mexico: Magic and Religion”— on Feb. 19.

“More Than Masks,” featuring ceramics, containers and headrests from various African cultures, represents the most valuable collection given to the museum in the last 15 years. It runs through Aug. 3.

“Mexico: Magic and Religion” shows the development of religious beliefs in Mexico after European contact. The traveling exhibit recently won a Rockefeller Foundation/CONACULTA (Mexico Culture Council) International Prize for Visual Arts. It will be at the museum through March 30.

“More Than Masks” celebrates the daily lives of the Zulu, Nupe, Tuareg, Bamileke and Lobi African cultures through the presentation of personal objects. Each piece featured in the exhibit reflects a range of technological, artistic and cultural traditions from throughout Africa. Designs and images on the ceramics reveal tribal affiliation and personal identity. Mary Jane Berman, director of the museum, said the texture and decoration of the pots show that they were created to be beautiful, as well as utilitarian. 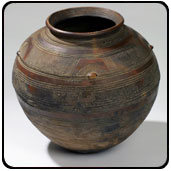 “These ceramics represent one of the few female arts known to us from Africa,” Berman said. “Most of what we know about African artistic production are objects created by men; objects used in daily life, made primarily by women, are often overlooked and do not make their way into museums or private collections. Wake Forest is fortunate to have this collection because it represents the expressive means that reflect women’s involvement in their societies.”

The collection—comprised of 102 pieces valued at $179,000— was given to the museum by an anonymous donor. Donations have comprised approximately 90 percent of the museum’s most significant collections in the last 15 years, Berman said.

“Mexico: Magic and Religion,” an exhibit of photographs, text and objects, examines many of the native religious practices of the Caribbean, Central America and South America. The Spanish conquest of these areas brought many changes to the indigenous peoples, including a compulsory conversion to Catholicism. Most native religious practices were then forced underground or disappeared.

In the 17th century, customs that resembled Catholicism were allowed. The slave trade then brought people from Africa to the Caribbean, Central America and South America. African beliefs and rituals became intertwined with the native practices of these areas. Today’s Mexican folk religions reflect pre-Hispanic, Hispanic (Catholic), African (Yoruba) and indigenous religious beliefs and practices.

At Wake Forest, “Mexico: Magic and Religion” is co-sponsored by the anthropology, Romance languages and religion departments; the Center for International Studies; the Divinity School; and the office of multicultural affairs.