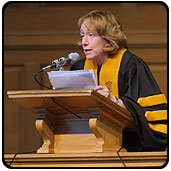 In a speech filled with humorous historical and personal anecdotes, presidential historian and journalist Doris Kearns Goodwin told an audience at Wake Forest University Feb. 21 that the United States can gain strength from remembering the successes of its past.

“As our country moves ahead in this new war on terror, I think we can take comfort in knowing that when we were challenged before, the essential strength of a democracy came through, the ability to release the free energies of a free people in a way that the most efficient dictatorship never can,” Goodwin said.

Goodwin’s speech was part of the university’s Founders’ Day Convocation. It will be broadcast in its entirety at 6 p.m. Feb. 22 on radio station WFDD (88.5 FM), the public radio station at Wake Forest.

Several university awards were presented during the ceremony, including the university’s highest honor, the Medallion of Merit. Dr. C. Douglas Maynard, acting dean of the Wake Forest School of Medicine and a driving force behind Winston-Salem’s transformation into a high-tech economy, received the award.

Speaking to the crowd of students, faculty and community members, Goodwin said that current world events should be used as inspiration.

“With this war on terror, our generation, particularly you students, have been provided with a rendezvous with destiny,” she said. “While the anxieties are great, there are also large opportunities for future political leaders, for journalists, for soldiers, for scientists, for business leaders.”

“While history never provides direct analogies, I do believe there are lessons to be learned by looking backward in time to leadership during previous moments of crisis,” she said.

Goodwin illustrated past presidential leadership with stories about Lyndon B. Johnson’s fight for the passage of the civil rights bill in 1964 and Franklin D. Roosevelt’s controversial decision to send American ships and supplies to Europe at the start of World War II.

As she watched the spirit of the New York firefighters, police and ordinary citizens after Sept. 11, she said it brought back memories of the Londoners during the blitz of 1940.

Goodwin, whose books include “Wait Till Next Year,” a memoir about growing up fascinated with the Brooklyn Dodgers, said her love of history is rooted in a love of baseball.

“I’m convinced the attraction to baseball is the way it connects the generations, providing shared experiences and endless stories that can be handed down from parent to child,” she said.

“I shall always be grateful for these curiously intertwined loves of history and
baseball which have allowed me to spend a lifetime looking back into the past, allowing me to believe that the past remains alive with every single one of us.”

Goodwin said keeping history alive is the responsibility of each individual.

“The private people we have loved in our families and the public figures we have respected in our history— like Franklin Roosevelt, Abraham Lincoln and countless others— really can live on, so long as we continue to tell and retell the stories of their lives.”

Later in the day, Goodwin signed copies of her books for a large crowd that gathered at the College Book Store. She held a private question and answer session with political science and history students and faculty on campus afterward.