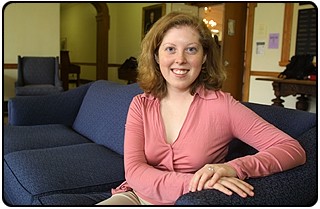 Wake Forest University junior Lindsay J. Littlefield of Moorhead, Minn., is among a distinguished group of undergraduates nationwide who have been elected as 2002 Truman Scholars by the Washington-based Harry S. Truman Scholarship Foundation.

Established by Congress in 1975, the Truman Scholarship Foundation awards merit-based $30,000 scholarships to college students who plan to pursue careers in government or other public service, and wish to attend graduate or professional school to help prepare for their careers. Each Truman Scholar receives $3,000 for their senior year of college and $27,000 for graduate studies.

Recipients must be U.S. citizens, have outstanding leadership potential and communication skills, be in the top quarter of their class and be committed to careers in government or the not-for-profit sector.

Littlefield, who is majoring in communication and political science, plans to seek a master’s degree in public policy and communication.

She would like to run for office and eventually become a senator or governor. She interned with U.S. Senator Byron Dorgan of North Dakota in the summer of 2001. She has a particular interest in gender-related issues including domestic violence, childcare and labor-related issues.

Littlefield was on the nationally ranked Wake Forest debate team for three years. She is also on the steering committee for the campus group WISE, the Women’s Initiative for Support and Empowerment.

The 2002 Truman Scholars will attend a week-long leadership development program in Liberty, Mo., beginning May 19. The event will be capped by an awards ceremony at the Truman Library in Independence, Mo., on May 26.

Scholars also have the option of applying to participate in a 10-week Washington Summer Institute.

She is the daughter of Robert and Kathy Littlefield. She attended Shanley High School in Fargo, N.D.