The musical, ‘The Secret Garden,’ opens April 12 at WFU 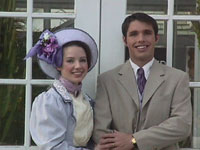 Directed by Brook Davis, assistant professor of theater, this Tony Award-winning musical is based on the Frances Hodgson Burnett’s classic children’s book. Pulitzer Prize-winning playwright Marsha Norman adapted the book for the stage.

“The Secret Garden” is set in an estate in Yorkshire, England, where newly-orphaned Mary Lennox is sent to live with her reclusive uncle and his invalid son, Colin. There, she finds a magic, locked garden that helps Colin recover from his illnesses.

Senior Susan Martin is the stage manager and Frank Ludwig, assistant professor
of theater, is the set designer. The light design is by Jonathan Christman, production manager for the theater department, and choreography is by Nina Lucas, associate professor of theater and director of the university’s dance program.

Members of the Wake Forest Orchestra will perform the music during performances of “The Secret Garden” under the direction of David Hagy.

Tickets are $12; $5 for students. They can be purchased at the door or by calling the Wake Forest Theatre Box Office at 336-758-5295. The box office is open weekdays from noon until 5 p.m. It is also open one hour before performances. Reservations are strongly encouraged.