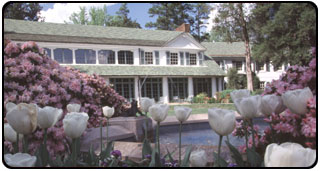 Wake Forest University is raising its capital campaign goal to $600 million, reflecting the inclusion of neighboring Reynolda House, Museum of American Art, its ongoing needs and other university priorities. Earlier this year, Reynolda House became an affiliate of Wake Forest.

Originally, the university set $450 million as the goal for the fund-raising effort called “The Campaign for Wake Forest: Honoring the Promise,” which kicked off publicly in April 2001. Already, the campaign—which concludes in 2006—has raised $388 million.

So far, $225 million has been raised for the Reynolda Campus and $163 million
for the Bowman Gray Campus.

The Wake Forest campaign is designed to raise endowment for student
scholarships and faculty support, as well as to meet ongoing program and facility needs.

Recent gifts to “The Campaign for Wake Forest” include $2 million from
Wachovia to endow the Wachovia Scholars Program and $1.9 million from the Lilly Endowment of Indianapolis to establish a center for vocational exploration for
undergraduate students.

The Wachovia program will furnish scholarships and career assistance to MBA students for the purpose of creating a more diverse student body. The Lilly Endowment gift will support the Pro Humanitate Center, which will offer a variety of programs including seminars for first-year students, workshops and symposiums.