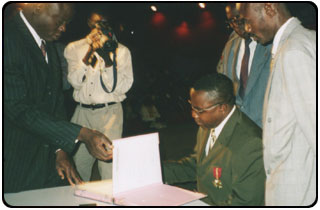 Sylvain Boko, seated, at the award ceremony in Benin

Boko was named a Knight of the National Order of Benin at a July 26 ceremony in Cotonou, Benin. The country’s president, Mathieu Kerekou, presented Boko with a presidential medal during the ceremony.

Boko, a Benin native who is now a U.S. citizen, created a Wake Forest study abroad program to Benin in 1998 called “Current Issues in African Development.” Students on the annual summer trip learn about the African economy by attending lectures, visiting agricultural and industrial sites, and spending one week with a host family. Students from the 2001 summer trip also initiated a project to raise money and medical supplies for Boko’s birthplace— Pobe Hospital, an open-air facility with just three doctors caring for more than 110,000 patients.

“This was a beautiful surprise and I am very appreciative of this honor,” said Boko, who was in Benin with the 2002 study abroad group when he learned of the award. “I am now even more committed to finding new and innovative ways to help fight poverty and underdevelopment in the nation where I was born.”

Boko, a member of the economics faculty since 1997, is an expert on international trade and economics. He recently published the book, “Decentralization and Reform in Africa.”