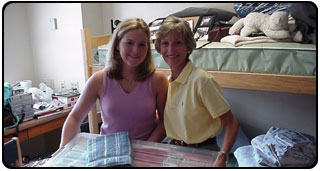 With her mother’s help, a freshman moves into her residence hall last year.

The Graduate School of Arts and Sciences at Wake Forest begins its orientation on Aug. 27 and classes start on Aug. 28. The 160 entering students will bring total Graduate School enrollment to approximately 450.

One hundred and eight first-year medical students began classes on July 29. The class is made up of 61 men and 47 women. The total number of medical students enrolled is not available at this time.

Orientation begins for 169 first-year students in the School of Law on Aug. 16. Included in the orientation week is a pro-bono class project with Habitat for Humanity. Total law school enrollment is about 475.