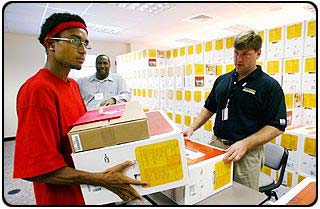 Michael Brown of Darby, Pa., picks up his IBM computer at the start of freshman orientation.

A long line of cars pause just long enough to unload in front of residence halls as Wake Forest University welcomes its 1,012-member freshman class to the Reynolda campus today. They bring with them the usual college essentials—bedding, toiletries, clothing and accessories, and school supplies.

Freshmen began moving into residence halls at 8 a.m. Today, the new students pick up student identification cards, parking stickers and mailbox keys. First-year and transfer students also pick up their IBM ThinkPads and printers from the Information Systems department between 10 a.m. and 5 p.m.

Freshmen register for classes on Aug. 26. Classes for all undergraduates begin Wednesday, Aug. 28.

Many incoming students and their families made long trips yesterday and stayed overnight in local hotels. Evan Smith, from Naples, Fla., drove 800 miles with his father, Jack, in about 17 hours. He said that Wake Forest is worth the long trip and his father agreed.

“I feel very comfortable with my decision,” Smith said. “A school with a reputation like Wake Forest’s will offer opportunities and open doors.”

Southern hospitality seemed to be one reason that many of the new students chose Wake Forest.

“Every time I came here I liked it more,” said Rebecca Schwartz, who visited Wake Forest from Ellicott City, Md., three times before moving into her residence hall room this morning.

She said she felt “a welcome and friendly atmosphere” from the moment she stepped onto campus. Schwartz also chose Wake Forest for its national reputation for academics.

Returning students and members of the Wake Forest staff helped with freshman move in. The biggest crowd was from 8 a.m. until noon.

With the help of the staff movers, it took Catherine LePrevost of Hickory, N.C., and her mother only two hours to move her things in and unpack everything. LePrevost is interested not only in the academic opportunities that Wake Forest has to offer but the extracurricular ones as well. She was a member of her high school Key Club and is interested in Circle K at the university.

While the new college students were excited to be away from home and beginning a new phase of their adult life, their parents were not as ready to let go. Schwartz’s mother, Ann, brought a box of tissues along with her.

Audrey Anderson arrived last night from Staten Island, N.Y., to drop off her daughter, Heather, who is the first of her siblings to leave for college.

“She’s my only girl, this is the hard one. After this, it’s all boys,” she said.

Preparations for freshman move-in began two weeks ago for resident advisors Thanh Vu and Jill Rowley in Collins Hall. All RAs spent the past two weeks working on training activities for the coming academic year. Today, they are in the lobbies of residence halls handing out keys, checking in students, and talking to parents.

For the seventh year, Space-Savers was on hand to help incoming freshmen with their residence hall needs. They set up a tent on Magnolia Court. Abner Wright, owner of the company and Wake Forest alumnus, says that his biggest sellers every year are surge protectors, phone chords and shelving units.

“The school takes the anxiety out of moving,” says Wright, who also provides this service at Queens College. The items, ranging from wastebaskets to hangers, are so popular that Space-Savers sells out of most of what is brought every year.