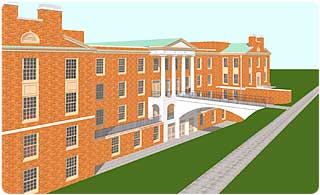 For the third time in five years, accounting students in Wake Forest University’s Calloway School of Business and Accountancy rank first in the nation for their performance on the 2001 Certified Public Accountant (CPA) exam.

In 2001, 75 percent of the Calloway students taking the exam passed all four parts. The score more than quadrupled the national average of 17.2 percent.

The scores were recently released for the four-part exam, compiled by the National Association of State Boards of Accountancy.

Wendel Kralovich, Kirk Sonnefeld and Brian Branson—all 2001 graduates— received medals for earning the three highest scores in North Carolina. This is the second time since 1997 that Calloway students have swept the state medals.

“We are pleased when the students do well on the CPA exam because it provides an external validation of the quality of the program,” said Lee Knight, professor of accountancy and director of the accounting program. “Almost all of our students have job offers at least six months before graduation.”

The Calloway School began offering a five-year program to earn both a bachelor’s and master’s degree in accounting in 1997. Since then, Wake Forest students’ CPA scores have ranked first or second in the nation each year.

Included in the program is a 10-week paid internship during the winter season, when CPA firms are their busiest. Wake Forest students participate in internships all over the country, from the Piedmont Triad to San Francisco.

Dale Martin, Wayne Calloway Professor of Accounting, attributes the students’ success on the exam to a rigorous program and an outstanding faculty that cares about the students. However, he also believes that “a significant contributing factor is the busy season internship program, which provides the students with a real-world exposure to many of the business and accounting issues that they study in their classes. Suddenly, everything they are learning becomes relevant.”

“The internship was a great experience,” said Margaux Lucas of the class of 2000. “Possessing a strong accounting background opened the door to career opportunities that I might not have been exposed to otherwise.” Lucas is now an analyst with the Asset Securitization Division of First Union Securities Inc. in Charlotte.

The 2001 results are the most recent available. University and overall scores for 2002 will be released during the summer of 2003. However, some preliminary information is available.

For instance, the university has recently learned that Eric Almond, a 2002 graduate of the Calloway program, received a bronze medal for the third highest score in the state in 2002.

More than 400 students are enrolled in the Calloway School, making it the largest
undergraduate program at Wake Forest. It offers four-year degrees in business, analytical finance, mathematical business and information systems, in addition to the bachelor’s and master’s degrees in accountancy.