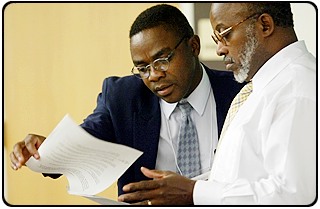 Nearly a decade after their local governments were given autonomous control from the central government, many African communities are still struggling to understand and use the power that has been given to them, says a Wake Forest University international economics expert and author of a new book about African economic reform.

“These local communities are going through a huge change in the way things are done,” says Sylvain Boko, assistant professor of economics at Wake Forest. “For decentralization to work, it requires a change in mentality of the central governments and a grassroots campaign at the local level to educate the people who now hold the power.”

Boko’s new book, “Decentralization and Reform in Africa,” published by Kluwer Academic Publishers, looks at four African countries that underwent reform and decentralization in the late 1980s and early 1990s and evaluates their use and management of monetary resources. Boko found that communities in all four countries — Benin, Mali, Burkina Faso and Ghana — were in need of fiscal education and awareness in order to pave the way to a successful decentralized, or democratic, government.

“The more autonomous they become with their own finances, the more successful they will be,” says Boko. “In turn, the countries’ credibility to the rest of the world improves.”

Boko says citizens must be educated fully about their rights and duties in their new government, including the costs of decentralization, like taxes. Then local leaders must launch awareness campaigns to show where the tax money is being spent — like road improvements, schools and hospitals — to garner the support of the people. He says the central government should help facilitate the process and that coordination between leaders at both levels is vital.

“There is no other way for African countries to develop without a full democratic process being put into place and followed with full participation at the grassroots level,” says Boko. “As a development economist, this is where the action is.”

Boko, a native of West Africa who was recently named a Knight of the National Order of Benin, has studied first-hand the countries about which he writes. For five years, he has led a Wake Forest study abroad trip to his homeland where students learn about African economic issues. During each trip, he conducted research for the book, traveling to Mali, Burkina Faso and Ghana to conduct interviews, retrieve statistics from local governments and observe the governments in action. The National Science Foundation financed the research.

Boko evaluated what services the communities offer and who offers them; determined what projects are invested in and who leads them; and talked with resource managers at the local level. He also examined the communities’ revenue sources, which range from taxes to loans.

Boko’s main concern was whether the local governments in each of the four countries were prepared to take advantage of the increase in their revenue intake, and subsequently use it to increase the services provided for the community. Only when that happens will Africa establish sustainable economic growth, which ultimately is to the benefit of everyone, he says.

“It is clear to me, especially in our world today, that the welfare of other countries has a direct effect on us,” says Boko. “Whether we know it or not.”