Wake Forest University honored two professors and two alumni with awards during its Opening Convocation Oct. 10. Genomics pioneer J. Craig Venter, a leader in the race to decode the human genome, was the keynote speaker during the program in Wait Chapel. 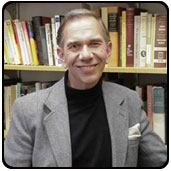 Andrew V. Ettin, professor of English, was presented with the Donald O. Schoonmaker Faculty Award for Community Service. Ettin, who joined the faculty in 1977, was recognized for his contributions to the university and the community.

He has participated in denominational, interfaith and community social and religious activities as a board member of the Union of American Hebrew Congregations, as the spiritual leader of Temple Israel in Salisbury, as the acting rabbi at Temple Emmanuel in Winston-Salem and as the Jewish chaplain at the Blumenthal Home for the Aged. 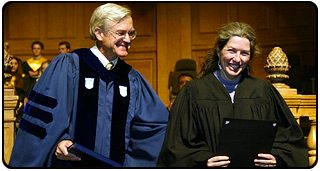 Katy Harriger, professor of political science, received the Jon Reinhardt Award for Excellence in Teaching. Harriger, who joined the faculty in 1985, was nominated for the award by alumni. The former students who nominated Harriger praised her for spending a great deal of time advising and working with students, especially on their writing.

According to students who nominated Harriger, her classes and assignments were carefully planned to take “full advantage of her compelling knowledge of the subject matter.” She focused on “pragmatic realities, but always with a measure of idealism as well.” She brings out the best in her students and conveys “a contagious enthusiasm for learning.” 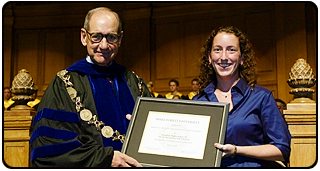 Rogers has taught fifth grade at P.S. 38 in East Harlem since graduating from Wake Forest in 1998. 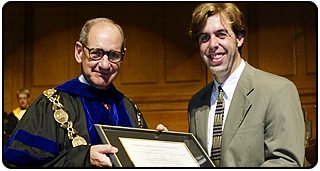 Milner teaches politics and history at the Career Center in Winston-Salem. The Career Center is an extension of regular Winston-Salem/Forsyth County high schools, offering advanced placement, vocational and Japanese language courses. Since graduating from Wake Forest in 1994, he has taught at a private school in Virginia and at a public high school and public middle school in Texas.

The Waddill Awards are given annually to one elementary school and one secondary school teacher who are Wake Forest alumni. David Waddill of Rye, N.Y., established the award in 1994 to honor his father, Marcellus Waddill of Winston-Salem, who retired in 1997 after teaching mathematics at Wake Forest for 35 years.