“Paysage Provencal,” a 1914 oil painting by French painter, Emile Othon Friesz, was donated to the Wake Forest Art Collection in 2002 from the estate of former professor Germaine Bree.

“Treasures II,” in the main gallery, consists of 30 works from the university’s art collections. The exhibit includes works collected by the university since 1941 ranging from Robert Lazzarini’s computer-generated “Telephone” to “Passacaglia,” a 26-foot tapestry by Swiss artist Sylvia Heyden.

The upstairs gallery will feature a multimedia installation by artist and musician John Richard Blackburn. A Winston-Salem native, Blackburn was the recipient of a project assistance grant from the Winston-Salem Arts Council in 2002. 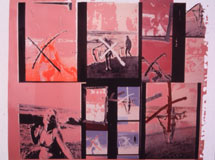 Richard Hamilton’s “My Marilyn” was donated to the Wake Forest Art Collection by Wake Forest graduate Catherine Woodard and her husband Nelson Blitz Jr. in 2002.

Many of the works that will be exhibited in “Treasures II” have never been shown on campus, including Richard Hamilton’s 1965 print of Marilyn Monroe called “My Marilyn.” Hamilton is celebrated as the founder of the Pop Art movement in England. He summed up the Pop Art movement in 1957 with a list of 11 criteria: popular, transient, expendable, low-cost, mass-produced, young, witty, sexy, gimmicky, glamorous and big business.

“Dusky Duck,” a print of a watercolor by John James Audubon, is a recent addition to the Wake Forest Print Collection. Naturalist, painter and draftsman, Audubon not only recorded the anatomical traits of birds and animals but also their behavioral patterns in watercolors. After several failed attempts to reproduce the subtle color of Audubon’s paintings in prints in an economical fashion, Julius Bien succeeded in 1858 using a new technology called chromolithography. “Dusky Duck” is from this series.

A 1914 oil on canvas, “Paysage Provencal,” by Emile Othon Friesz was donated to the Wake Forest Art Collection by the estate of former Wake Forest professor Germaine Bree in 2002. Friesz gave up his formal education and began studying the Impressionist style in 1903. He emulated Fauve and then Cézanne and associated with the likes of Matisse and Braque. Although Friesz was honored by his colleagues by the end of his life, he never attained their status.

In 1934, French painter Raoul Dufy described Friesz as “the most gifted painter of our generation.”

Audio tour wands are available, free of charge, for “Treasures II.” The wands provide a recorded description of all pieces in the “Treasures II” collection. They will be available in the reception area of the gallery.

In the upstairs gallery, Blackburn will create an exhibit designed for a single viewer.

“The fact that only one person can view the piece at a time makes it more personal, which in a sense makes it more interactive,” said Blackburn. “It’s all about humanity’s witness to the world and realizing that at times we’re each such a small part of it that we can only be a witness.”

Blackburn’s first exhibition was in 1995 at Winston-Salem’s Alban Eiler Gallery. A few months later, he became involved with a loosely affiliated group of artists and musicians who began renting studio space in a former industrial building downtown. Called Wherehouse, the building has become a complex of artist’s studios and living spaces, as well as a cutting-edge visual and performing arts forum.

Blackburn’s rock group, Finks, will perform at 8:45 p.m. at the exhibition’s opening reception on Nov. 22. He began playing guitar with some of Wherehouse’s musicians and now fronts the four-member band.

Wake Forest art collection notepaper will be introduced in the Hanes Gallery Nov. 21. It will also be available at the bookstores on the university’s Reynolda and Bowman Gray campuses, as well as the Reynolda Campus bookstore web site at www.deaconshop.com. The notepaper will include works by John Singleton Copley, Albert Bierstadt, William Merritt Chase, Richard Anuszkiewicz and Robert Longo.