Advisory: Expert on African economy available for comment on Liberia 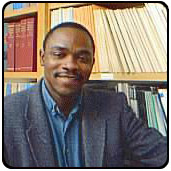 Sylvain Boko, an associate professor of economics at Wake Forest University, author of “Decentralization and Reform in Africa,” and a native of West Africa, is available for comment on stories relating to the recent resignation of Liberian President Charles Taylor.

Boko says it remains to be seen if Taylor’s resignation and dramatic departure from the country will pave the way for economic recovery in the West African region.

“The region must offer conditions and incentives to attract private investors, rebuild the infrastructure and take advantage of its rich resources in order to restore economic stability,” says Boko, who travels regularly to his home country of Benin.

Although active United States intervention is necessary to begin the humanitarian, political and economic rebuilding of Liberia, Boko says foreign military intervention should be used cautiously.

“U.S. authorities are correct to let the regional military force take the lead of any peacekeeping operations, but they must be careful not to underestimate the seriousness of the situation.”

Contact Boko directly at bokosh@nullwfu.edu, or through Sarah Mansell at manselss@nullwfu.edu or 336-758-5237.