In a complementary blend of both visual and performing arts, Wake Forest University’s Charlotte and Philip Hanes Art Gallery will celebrate the opening of “Inside/Outside: Contemporary Cuban Art,” on Oct. 24 from 7 p.m. – 9 p.m.

The celebration will feature a gallery lecture by exhibition curator David Hart at 6 p.m., a reception with Cuban cuisine from La Isla Cuban Restaurant beginning at 7 p.m. and a performance by Marianela Boán, an internationally known Cuban dancer and choreographer, at 8 p.m. 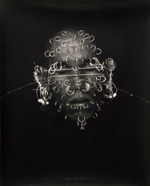 The exhibit, which highlights the recent work of artists born or educated in Cuba, will feature more than 30 contemporary works of art from a broad range of media, including paintings, photographs, sculpture and multimedia installations. The works represent diverse interpretations of social, personal and psychological-intellectual issues related to Cuban culture.

Boán, who studied under Ramiro Guerro, the father of Cuban modern dance, has toured in more than 40 countries and created dozens of works for DanzAbierta as well as the Cuban National Ballet, Venezia Balleto, and several international films. Her self-proclaimed “contaminated” style incorporates everything from song, theater and dance and provides both a wide-angled and microscopic view of society.

Cuba has always had a long-standing tradition of producing great artists. But, according to the exhibit catalog written by Hart, Cuban art was particularly influenced by the 1959 Revolution and Fidel Castro’s radical commitment to providing health care, housing and literacy to all of Cuba’s citizens. As a result, the government invested heavily in art literacy and education and has continued to produce one of the best-educated art populations in the Caribbean. 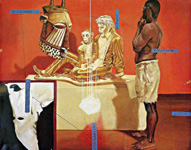 After the collapse of the Soviet Union in the late 1980s and the continuation of the U.S. embargo against Cuba, the country experienced the economic crisis Castro dubbed the “special period.” During this period, censorship rose, shortages in consumer goods were widespread and Cuban artists who had gained international recognition left the country in large numbers producing the “exile” community of artists, known as the “generation of the 1980s.” Some of the artists featured in this exhibit were among that “generation.”

Several of those exhibiting have been inspired by ritual and myth and create their own visual language and symbolism. Elsa Mora’s assemblage pieces, such as “The Closed Hand,” reflect her interest in forging relationships among found objects. Although a sense of the spiritual element appears in her work, it is not generated by religious practice. Instead, she structures her composition method similar to the way myths are structured in religion. 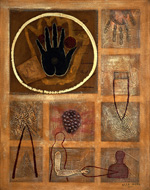 Juan Carlos Alom engages aspects of Cuban culture through a poetic view of photography. His works, including “Sin Palabras, from Caminos Secretos (Without Words from Secret Paths), reflect several modes of fashioning and displaying objects and the creative means by which Cubans “make-do” under the economic strains of the “special period” and the United States embargo.

In his paintings, Armando Mariño daringly depicts the multi-layered references to racial controversies in Western art. “El Racismo Explicado a los Ninos” (“Racism Explained to Children”) is such as example. 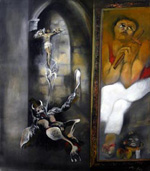 The exhibit and dance performance is sponsored by the departments of art, Latin American studies, and Romance languages as well as the Office of Multicultural Affairs and the Center for International Studies.