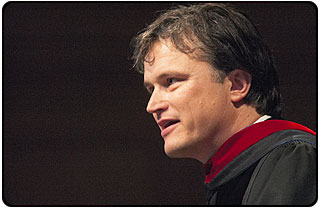 University Chaplain Tim Auman speaks on the power of language at Fall Convocation.

Wake Forest University honored two professors and two alumni with awards during its Fall Convocation Oct. 9. The Rev. Timothy L. Auman, who was appointed chaplain at the university in July, was the keynote speaker during the program in Wait Chapel. 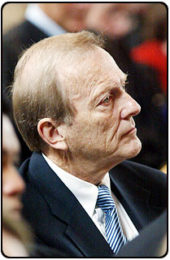 He has served Winston-Salem State University on its board of visitors and its Business Advisory Council, and he has advanced international understanding through his work with Rotary International.

Peter D. Weigl, professor of biology, received the Jon Reinhardt Award for Excellence in Teaching. Weigl, who joined the faculty in 1968, was nominated for the award by alumni. The former students who nominated Weigl praised him as an excellent mentor and a life-long friend. 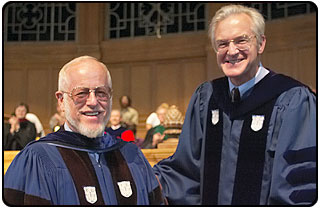 Professor of Biology Peter Weigl (left) receives
the Jon Reinhardt Award for Excellence in Teaching from Dean of the College Paul Escott.

According to students who nominated Weigl, he has always been interested “not only in their knowledge, but also in their overall development and growth.” 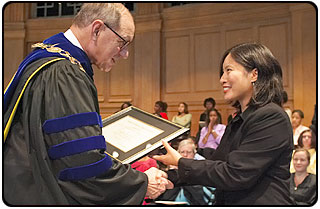 Winners of the 2003 Marcellus Waddill Excellence in Teaching Awards are alumnae Joy Bautista. 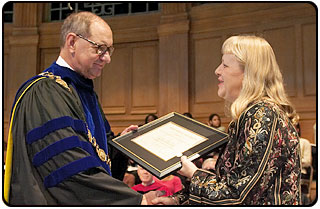 Since graduating from Wake Forest in 1998, Bautista has taught in the Boston area, most recently at the Boston Arts Academy, where she teaches science courses in physics and chemistry.

The Waddill Awards are given annually to one elementary school and one secondary school teacher who are Wake Forest alumni. David Waddill of Rye, N.Y., established the award in 1994 to honor his father, Marcellus Waddill of Winston-Salem, who retired in 1997 after teaching mathematics at Wake Forest for 35 years.