Ciaran Carson, a Belfast writer whose volumes of poetry are published in North America by Wake Forest University Press, recently won the Forward Prize, the United Kingdom’s most prestigious annual award for poetry. The award is worth 10,000 British pounds, approximately $17,000.

The award, which was announced in October, was given to Carson in recognition of his ninth and most recent collection of poetry “Breaking News,” published in March 2003 by Wake Forest. The collection includes dispatches from a war correspondent and verses on the horrors of conflict.

Born in Belfast in 1948, Carson has won a number of awards for his work, including the first TS Eliot Prize in 1993. Also a gifted musician, he is a former literature and arts officer of the Arts Council of Northern Ireland. 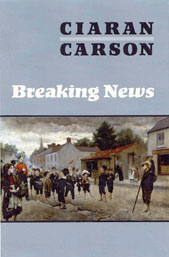 Carson, a graduate of Queen’s University in Belfast, was recently appointed as the first director of the new Seamus Heaney Centre for Poetry at Queen’s University. The center is planned as an international base for high-quality research and creative writing with a particular, but not exclusive, focus on poetry in modern Ireland.

Wake Forest University Press, the premier publisher of Irish poetry in North America, was established by Irish scholar and English professor Dillon Johnston in 1976. During its first year, the press published works by Austin Clarke, John Montague and Ciaran Carson.