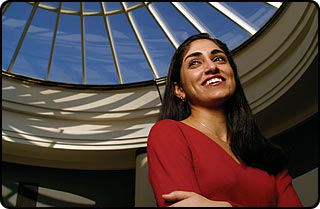 Rosita Najmi, a Wake Forest University senior, was one of 20 students named to the First Team of USA Today’s 2004 All-USA College Academic Team, which honors students for outstanding intellectual achievement and leadership.

Najmi, an economics major from Knoxville, Tenn., was recognized for her work with Project Bokonon, a non-profit organization she co-founded to improve access to medical care in Benin, West Africa. She is featured in the Feb. 12 issue of USA Today.

The First Team was selected from a group of 604 students nominated by colleges and universities across the country.

The winners each receive $2,500. Forty more students were named to the second and third teams.

“Over the 15 years we’ve been honoring these teams, we have spotlighted students who’ve taken their education beyond bettering themselves to bettering the world,” USA Today editor Karen Jurgenson said. “We salute these students to call attention to some of the good things happening at the nation’s colleges and universities.”

Through Project Bokonon, Najmi raised money to build a new clinic in Pobe, Benin. She first went to Benin with a Wake Forest class studying economic development issues there in 2001 and plans to return this summer. The class was taught by Sylvain Boko, assistant professor of economics at Wake Forest, and a Benin native.

Najmi has helped construct a schoolhouse in Vietnam and translated French and Farsi into English for the Tahirih Justice Center in Washington, D.C., which helps women who have fled to the United States as political refugees.

She has also presented her research on microfinance at an international conference on the role of women in Africa’s development.

Najmi is a member of the Omicron Delta Epsilon Economics Honor Society and the Omicron Delta Kappa Leadership Honor Society. She has helped develop service opportunities for Wake Forest students through her work on Wake Forest’s Pro Humanitate Center Student Advisory Board and the International and Domestic Service Trip Advisory Board. She is a leader in the Winston-Salem Baha’i Community.

Last September, Najmi was named one of Glamour magazine’s Top 10 College Women for 2003.

She is the daughter of Tehereh M. Najmi of Knoxville.