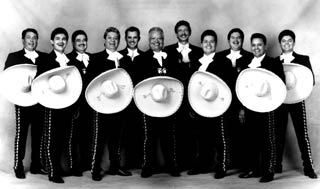 Celebrating the rich musical traditions of Mexico, the Masters of Mexican Music will perform the final Secrest Artist Series concert of the 2003-2004 season at Wake Forest University. The concert will be held March 26 at 7:30 p.m. in Wait Chapel.

Twenty-one master musicians and dancers will showcase the musical traditions of four distinct regions: the syncopated harp-led “son jarocho” of southern Veracruz, the accordion-based “conjunto” of the Texas-Mexican border area, the melodic marimba of southern Mexico and the mariachi of Jalisco.

The concert will feature music, song and dance from Hispanic musicians who now live in the United States, but were either born in the regions of their respective musical traditions or learned from a family member native to that region.

The concert will begin with “música jorocha” by José Gutiérrez and Los Hermanos Ochoa. This trio of accomplished “jorocho” musicians include brothers Felipe and Marcos Ochoa and renowned musician Gutiérrez as lead singer.

They will perform the “son jorocho,” the hard-driving traditional music of Veracruz. “Son” refers to the kind of music, which has strong rhythm, simple harmonies and poetic lyrics. “Jarocho” refers to the people of southern Veracruz, who hold a rich Spanish heritage with strong African influences.

Growing up in a family where relatives played “jarocho” music after a hard day’s work, Gutiérrez began playing the guitar as a child and later learned the “jarana,” a thin-bodied guitar that supplies the rhythmic, harmonic base for the music. Today, he specializes in the “requinto jarocho,” a four-stringed, thin-bodied guitar that is plucked with a four-inch pick.

The second musical tradition represented at the concert will be the Texas-Mexican “conjunto tejano” with Domingo “Mingo” Saldivar and his band Los Cuatro Espadas. “Conjunto tejano” means Texas-Mexican group or ensemble and refers to the musical tradition that emerged north of the Mexican border. The concert will feature accordion and dance rhythms such as the “ranchera,” “huapango,” polka, waltz and “corridos.”

Dubbed the “The Dancing Cowboy” because of his dynamic playing and energetic performances, Saldivar was the first musician to combine country songs in a “conjunto” setting. He is a two-time Grammy nominee, an inductee into the “Conjunto” Hall of Fame in San Antonio, Texas, and the recipient of the 2002 National Heritage Fellowship.

The three-person ensemble, The Marimba Chiapas, led by Lorenzo Cruz will be the third musical group to perform at the concert. Cruz, who is originally from the state of Chiapas located in southernmost Mexico and northern Central America, is a notable performer of the complex, syncopated music of the classic marimba, an instrument similar to the xylophone. The trio will perform a traditional repertory, including both waltz-like and faster pieces that are infused with Spanish syncopation.

The final tradition to be featured at the concert will be the mariachi of Jalisco with Mariachi Los Camperos de Nati Cano. Multi-instrumentalist and bandleader Natividad “Nati” Cano directs the band, which is considered one of the most acclaimed mariachi ensembles in the world.

Cano, who founded Los Camperos and has directed the group for more than 40 years, is a masterful showman and dedicated teacher. He has toured and recorded work with Linda Rondstadt, performed at the White House for two presidents and performed at major venues, including New York’s Lincoln Center, the Smithsonian Folklife Festival and Guadalajora’s Teatro Degollado.

He is an adjunct faculty member in the department of ethnomusicology at the University of California at Los Angeles. In 1990, Cano was made a National Heritage Fellow for his contributions to the traditional art of mariachi.

The Secrest Artist Series presents this concert in partnership with ArtsIgnite/the Arts Council of Winston-Salem and Forsyth County. Major support for the Masters of Mexican Music national tour is provided by the National Endowment for the Arts, the MidAtlantic Arts Foundation and the NEA Regional Touring Program.

A free pre-concert talk with classical guitarist and Wake Forest Lecturer in Music Patricia Dixon will be held at 6:40 p.m. in the balcony room on the second floor of Wait Chapel.

Concert tickets are $15 for general admission; $12 for non-Wake Forest students and senior citizens; and $11 for group of ten or more. Tickets are available without charge to all Wake Forest students, faculty and staff. Tickets can be purchased weekdays between 12 p.m. and 5 p.m. by calling the Theatre Box Office at 336-758-5295 or visiting the Box Office in Scales Fine Arts Center. For group discount tickets, contact the Secrest Series Office at 336-758-5757.