Guitarist celebrates release of CD with Recital at WFU 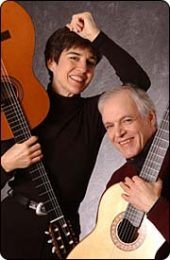 The recital, which is a celebration of the first release of Van’s music on compact disc, will include performances of works by Van as well as Bach, Fernando Sor, Isaac Albéniz, Manuel de Falla, Ida Presti and Maximo Pujol. A highlight of the recital will be the performance of Van’s “Partita for Two Guitars” featured on the CD.

The CD, titled “The Music of Jeffrey Van,” is scheduled for release in mid-April by Centaur Records. CD orders may be made at the concert.

The CD includes “Reflexiones Concertantes,” a concerto for two guitars and chamber orchestra written by Van and commissioned by Dixon; “A Procession Winding Around Me” for mixed choir and guitar featuring the Wake Forest Concert Choir; “Sprig of Rosemary” for a cappella choir and “Partita for Two Guitars” played by Van and Dixon.

Dixon, a Chilean-American guitarist, is a graduate of the North Carolina School of the Arts and the University of North Carolina at Greensboro. She has performed in Spain, South America and the United States as a soloist and in chamber music concerts. She has been a featured soloist with the National Youth Symphony Orchestra of Santiago, Chile, the Winston-Salem Piedmont Triad Symphony, the Carolina Chamber Symphony in North Carolina and the Monterey Symphony in California.

Van has premiered more than 50 works for guitar, including four concertos and a variety of chamber music. He has performed at Carnegie Hall, London’s Wigmore Hall and the Kennedy Center. He has made several solo and ensemble recordings and has appeared on eight recordings with the Dale Warland Singers. He is a lecturer and guitar teacher at the University of Minnesota School of Music.

“Reflexiones Concertantes” was commissioned by Dixon and funded by Wake Forest’s Archie Funds for Faculty Excellence and the Graduate School Research and Publication Fund.