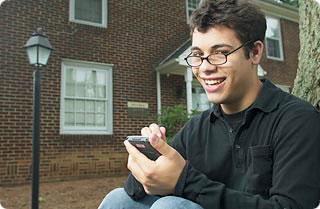 Nine Wake Forest University students will experience high-tech living in a house this academic year that has been equipped by the university’s Information Systems (IS) department with some of the latest technology. The Technology Quarters house will allow the students to learn about new technology, share technical expertise and help the university test new software and hardware being considered for campus use.

The Technology Quarters house builds on the success of the Technology Quarters program started during the 2003-2004 academic year in a residence hall. The program offers students all of the technological amenities of regular university residence halls like wireless connectivity, plus a few innovative gadgets that are not yet offered to the larger student body. Students in Technology Quarters will test out a variety of software and hardware this year, including Cisco IP 7960 phones that connect to the Internet and display Web pages on a small screen and Cisco IP SoftPhone software. The university will also provide ThinkPad docking stations, external keyboards and flat panel monitors for the students.

The house will have a Sony 61″ projection television that can be connected to a range of multimedia equipment, including DVD players, VCRs, various gaming consoles and the students’ laptop computers. Rooms in the house have also been equipped with Lutron dimmers for the lights and motorized shades for the windows.

“Wake Forest has always turned to its students when considering new technology to bring to campus,” said Jay Dominick, assistant vice president for information systems. “The students are the experts on what technologies they want and how they want to use them.”

A number of universities have started offering technology-themed residence halls; however, the program at Wake Forest is one of the few in the country that gives students a chance to work closely with the IS department in an effort to evaluate software and hardware before it is made available to the larger student body. The program proved mutually beneficial during the 2003-2004 academic year, Dominick said.

The Technology Quarters program was created last year through a partnership between the university’s IS and Residence Life and Housing departments. Last year, a portion of the third floor of a campus residence hall was converted into a high-tech living space for several first-year students, but this year the program will have nine students, sophomores or higher, living in a house near the northern part of campus. A few students who applied for the program will also be able to participate this semester on a smaller scale from their residence hall rooms.

Students in the program previously expressed an interest in technology and in living in the house, but extensive computer experience was not a requirement for living in Technology Quarters, Dominick said. Last year’s group tested out the HP PSC 1350, a printer used for printing, scanning and copying. Based on reviews from students in Technology Quarters, the university is distributing the printer to all freshmen this academic year. Students in the program last year were also given a high- speed wireless Internet connection. The entire university community will use that same high-speed wireless connection starting in August 2004.

In addition to testing a variety of equipment, the students in Technology Quarters this year will test various software programs for the handheld computers in the fall, including a messenger program designed by university software developers. The messenger program allows subsets of groups to send and receive instant messages on their handhelds and their laptop computers without having to open a particular window or program.

“The data collected from these students is imperative, as they are the link to the student body,” Dominick said. “This initiative not only allows Wake Forest to gain insight from the students, it gives students the opportunity to test cutting-edge equipment, be a voice in the next generation of technology at Wake Forest and have fun doing it.”

To ensure that every undergraduate has equal access to the benefits of technology in an academic setting, Wake Forest has provided all students with university-owned laptop computers since 1996. The university also provides color printers to all undergraduates. The printers and laptops become property of the students upon graduation. Last year, the university ranked second in The Princeton Review’s list of the Top 25 Most Connected Campuses.