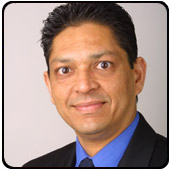 Ajay Patel has been named interim dean of Wake Forest University’s Babcock Graduate School of Management. Patel has been a faculty member at the Babcock School for 10 years and has served as associate dean for faculty and alumni affairs since 2002.

Wake Forest Provost William Gordon announced Patel’s appointment Wednesday. Patel will begin his new responsibilities Aug. 1. He will replace Dean Charles Moyer, who announced last fall that he will step down from that position July 31 and will return to the Babcock School’s faculty. A national search to find a permanent replacement for Dean Moyer is in progress.

Patel joined the Babcock School faculty at Wake Forest in 1993 after a previous faculty appointment at the University of Missouri. In 2001, he was appointed as the first Babcock Research Professor of Finance. The professorship was endowed through pledge gifts from investment counseling firms and Babcock School alumni Raymond F. Bourne and Bryan Somerville.

During his tenure at the Babcock School, Patel has won numerous professional awards and teaching honors. He is the recipient of the 2001 Kienzle Teaching Award, presented annually to a Babcock School faculty member who represents the highest standards of teaching excellence. Babcock alumni select the winner in a survey taken two years after their graduation.

In both 1997 and 2000, Patel was honored with the Outstanding Faculty Award for the Babcock School’s Charlotte program. Patel’s work has been widely published in scholarly journals, and he has won several awards from academic and practitioner associations. Patel received a bachelor’s degree from St. Josephs College, a master of business administration degree from the University of Baltimore and a doctorate from the University of Georgia.

“He has a distinguished record as both a teacher and scholar, and has been a very effective and articulate advocate for the school,” Gordon said. “We are fortunate to have an exceptional person such as Ajay to lead the school in this interim capacity, and we are very grateful to him for his willingness to serve.”