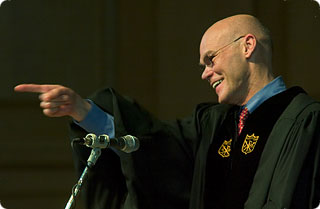 James Carville, Democratic strategist and co-host of CNN’s “Crossfire,” told an audience at Wake Forest University Feb. 3 that success and failure come hand-in-hand, even for the brightest, most ambitious minds.

“The more you want to succeed and the harder you try and the bigger your dreams,” Carville said, “the more you’re going to fail.”

Carville, a political consultant well-known for leading the two victorious campaigns of President Bill Clinton, spoke during Wake Forest’s Founders’ Day Convocation in Wait Chapel. He was applauded by an audience of nearly 2,000 students, faculty, staff and community members as he marched down the aisle in the processional.

In his address, Carville used humor and a critical look at the life of Abraham Lincoln to illustrate the connection between success and failure.

“He was the biggest loser in American history,” Carville said, citing Lincoln’s numerous failures in business, politics and life. “But, he had a dream and he stuck with it. He would lose and he would go back – he was unfazed by it,” Carville said later of Lincoln.

“I had a good friend, who did a bad thing,” he said. “I thought about it, and decided to forgive the bad thing, and stick with my good friend.”

During the ceremony, the university recognized several students – the field hockey team, which won its third consecutive NCAA Championship in 2004; the men’s soccer team, which won the ACC regular season title; and Wake Forest seniors Rebecca Cook, who was recently named a Rhodes Scholar, and Anjali Garg, who was named a Truman Scholar.

In addition, several university awards were presented to alumni and faculty. The Medallion of Merit, the university’s highest honor, was presented to Dr. Timothy Pennell of Winston-Salem and Willis “Doc” Murphrey III of Roanoke Rapids, both Wake Forest alumni.