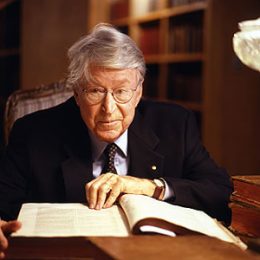 A memorial service will be held at 2 p.m. Feb. 16 in Wake Forest’s Wait Chapel.

When presented with the award, he was described by Wake Forest President Thomas K. Hearn Jr. as “the voice, the conscience, and the mind of Wake Forest for three decades—and my friend.”

Since his retirement, he served as a special consultant to Hearn and continued living in a neighborhood adjacent to the university. Brantley, a 1945 graduate of Wake Forest who was reared in Zebulon, served three Wake Forest presidents—Harold Tribble, James Ralph Scales and Hearn.

During his long association with the university, he saw the university move from the town of Wake Forest to Winston-Salem, establish self-governance and independence after developing a new relationship with the Baptist State Convention of North Carolina, and evolve from a respected regional college to a prestigious university with a growing national reputation. Through it all, he became well known to North Carolina journalists as he was the primary university official who issued press releases and fielded journalists’ questions.

Interviewed for a 2001 Wake Forest Magazine article, Brantley claimed he “went to work at Wake Forest only because I wanted to see a college move.” Established in the Wake County town of Wake Forest in 1834, the university moved to Winston-Salem in 1956 after several years of planning and construction of a new campus.

Brantley often recalled he did not initially anticipate staying on the university staff for more than a few years. He ultimately remained for decades, he explained, because “the second love affair I had with Wake Forest was a whole lot stronger than the first one (as a student).”

In previous interviews, Brantley said he left newspaper journalism for a career at Wake Forest because he anticipated having more time for creative writing. The university’s move actually led to his working harder than ever, he said, but he did publish one novel in 1962, “The Education of Jonathan Beam.”

In 2000, he published a book of poetry titled “Fetch-Life,” a term that refers to the spirit sent to fetch the life of a dying person. The poetry book was dedicated to his late son, William Russell Brantley. It was published before the death of his wife, Elizabeth Jones Brantley, a 1944 Wake Forest graduate and one of the university’s first female students.

In the 2001 Wake Forest Magazine article, Wake Forest President Hearn said “Russell Brantley has lived his whole adult life in dialogue with Wake Forest, and he has been an agent in shaping how we have understood our challenges and our institutional culture.”