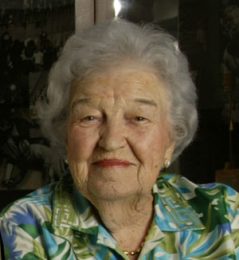 A memorial service will be held at 4 p.m. Feb. 16 at Vogler & Sons Reynolda Road Chapel.

Crisp was named to the Wake Forest Sports Hall of Fame in 1993 for her role in shaping women’s athletics. She established Wake Forest’s physical education program for women, founded the intramural sports program for women and later led the university’s efforts to organize intercollegiate athletics for women at the university. She served as director of women’s athletics from 1971 to 1974.

Crisp retired as associate professor of physical education in 1977, but continued to coach women’s golf until 1983.

“Marge was the founder of women’s athletics at Wake Forest and we are all indebted to her for what she did at the very start,” said Ron Wellman, Wake Forest’s director of athletics. “We wouldn’t be where we are today without her.”

Crisp was a high school basketball star in her hometown of Grover in Cleveland County, then competed in that sport along with field hockey, volleyball and track as a student at Appalachian State University. She was a 1934 graduate of Appalachian State University and held a master’s degree from George Peabody College (now part of Vanderbilt University). Before coming to Wake Forest, she held positions at Gardner-Webb College and Louisburg College.

Crisp served several years as president of the Old North State Senior Women’s Golf Association. In 1979, she received the Distinguished Alumni Award from Appalachian State University and, in 1984, she became the first female inductee into Appalachian State’s Athletic Hall of Fame.