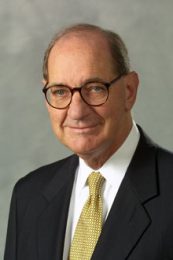 “At a time when the average presidential tenure lasts only seven years, his two decades of service to Wake Forest are truly remarkable,” wrote Murray Greason, chairman of the Wake Forest board of trustees, in a letter nominating Hearn for the award. “During these twenty years, Tom Hearn’s efforts to strengthen our university have made Wake Forest one of the most inspiring success stories in American higher education. That he has done so without sacrificing any of the values that are part of our 170-year heritage is testament to his leadership and his vision.”

According to the citation presented to Hearn, the award was given in recognition of Hearn’s ability “to create a vision and inspire others and in praise of his efforts to establish a positive image for the institution while leading it to higher levels of success.”

Hearn has served as Wake Forest’s president since 1983 and plans to retire June 30. During his more than two decades in office, Wake Forest has moved into the ranks of the top 30 national universities and has become a national leader in the use of academic technology. Wake Forest’s endowment has grown from $125 million to more than $800 million. The university is nearing completion of a $600 million capital campaign.

Hearn has been recognized as a leader in economic development in the Winston-Salem area. He also has been a leader in intercollegiate athletic reform and was recently named chair of the Knight Foundation Commission on Intercollegiate Athletics.