Wake Forest University senior Blake Brandes of Hickory, who has mixed hip-hop with academic study and volunteer service, has been awarded a Marshall Scholarship.

Brandes is the son of Rand Paul and Elizabeth Harris Brandes of Hickory. He attended Hickory High School. 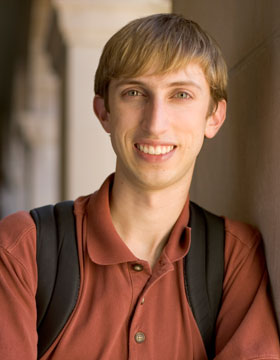 “Blake has established a powerful presence on campus by use of his diverse capabilities,” said Wake Forest University President Nathan O. Hatch. “We are pleased that his talents are being recognized with the prestigious Marshall Scholarship.”

Brandes, who is majoring in English and French at Wake Forest, plans to study for a master’s degree at the University of Kent in England, where he will specialize in post-colonial studies.

“I hope to use the Marshall Scholarship to work for an NGO (non-governmental organization) or a think tank to address social and political issues related to youth, specifically urban youth,” Brandes said. “I’m looking at the connections between hip- hop, youth culture and political and social identity.”

Brandes is a Graylyn Scholar at Wake Forest. The scholarship is made possible by Wake Forest’s Graylyn International Conference Center.

For an independent study of Arab youth culture and music in Paris, Brandes interviewed Arab activists, music label directors and promoters and underground rap musicians. He has also traveled to Morocco to study Arabic language and culture.

Brandes is a popular hip-hop performer on the Wake Forest campus and at off-campus venues, including social service agencies. He has worked with Winston-Salem community centers to establish a hip-hop expressions program and founded the Hip-Hop Culture Club at the university. He also runs his own DJ services and production company.

“While his mentors have struggled to define and pigeonhole his power and his path, Blake forges clear goals that incorporate his three essential loves: literature, contemporary events and the world cultures of popular music,” said Thomas Phillips, director of the Wake Forest Scholars program.

Brandes has traveled to Dublin to conduct independent research on James Joyce. He is an editor for the Philomathesian Journal on Liberal Arts. Brandes also won Wake Forest’s D.A. Brown Award for Excellence in Writing.