Wake Forest University junior Elizabeth Lundeen of Grand Rapids, Mich., is among a distinguished group of undergraduate students nationwide who have been named 2006 Truman Scholars by the Washington-based Harry S. Truman Scholarship Foundation. 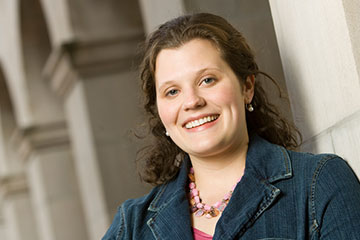 Lundeen is one of 75 students from 63 colleges and universities named Truman Scholars.

Each scholarship provides $30,000 for graduate study. Established by Congress in 1975, the Harry S. Truman Scholarship Foundation awards merit-based scholarships to college students who plan to pursue careers in government or other public service and wish to attend graduate or professional school to help prepare for their careers.

Specific selection criteria include outstanding leadership potential, commitment to a career in government or the not-for-profit sector, intellectual ability and likelihood of “making a difference.”

Lundeen, who is majoring in political science and history with a minor in women’s and gender studies, plans to pursue a joint law and master’s in public policy degree.

“Before practicing environmental law, I plan to work for a few years in the public sphere, either for the government or for a non-profit agency,” Lundeen said.

“I’ve learned so much about policy and the public sphere through my experience on the debate team,” she said.

She is also president of the College Democrats and spent a summer working as a field organizer with the League of Conservation Voters in Wisconsin.

This summer, she will be a student leader for a service trip to a Russian orphanage with a program organized through Wake Forest’s Volunteer Service Corps.

Lundeen is the 14th Wake Forest student to be named a Truman Scholar.

The 2006 Truman Scholars will assemble May 14 for a week-long leadership development program in Liberty, Mo., and receive their awards in a ceremony at the Truman Library in Independence, Mo., on May 21.

For a listing of the 2006 Scholars and more information on the Foundation, see www.truman.gov.