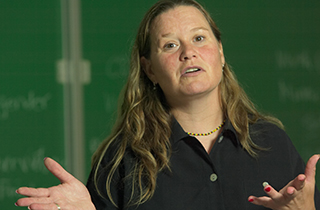 In graduate school at the University of Wisconsin where we had strong courses on both “the family” as well as race/ethnicity, gender and power. When I was doing my dissertation research and writing my first book, Women Work and Family: Balancing and Weaving, I became acutely aware of the struggle many African-American families face in the labor market and in finding and paying for quality, trustworthy childcare.

What hypotheses did you have when you began your research? Did your research support your expectations or did you discover some surprising results?

That African-American families would face unique struggles that were a direct result of the system of racial domination (chattel slavery and Jim Crow style segregation) that has been in place since the beginning of our country. This was confirmed. Profoundly.

One of the most unanticipated findings was the role that incarceration plays in African-American families. This was unanticipated because family scholars pay little to no attention to incarceration. In fact, in the peer review process for the book, other scholars were puzzled by the inclusion of this chapter in a book on families. Yet, it was clear in the research that the institution of the criminal justice system plays a huge role in African-American family life. I was shocked to find out that the social programs designed to help families in crisis are in fact completely inaccessible for many families touched by incarceration. It’s as if the people in the most need of help (the families of incarcerees) are the least able to get any help from the government’s many social programs. This results in incarceration being significantly more devastating to African-American families than it might otherwise be.

Your research included interviews with the victims and perpetrators of domestic violence. What professional and personal difficulties did you encounter in doing these interviews?

Time. Men and women wanted to talk for lengths of time that we just did not have. Scheduling interviews and staying on schedule at times proved to be difficult with men and women negotiating the daily struggles in their lives…for example arriving late to an interview because the babysitter didn’t arrive might throw off the schedule for the rest of the day!

One of the best parts of interviewing was meeting people “where they are”–in their homes, in the hospital, in jail. This allowed us to observe more about their daily lives that led to a much richer and more complete picture that we believe we were able to reflect in the book. It reinforced my training that sociology is about learning to see the world through someone else’s eyes.

Personally it was exhausting to hear about brutal violence and tragedy–being HIV positive at 28 years old, being incarcerated for most of your adult life, growing up as a child prostitute in East Winston, watching your father murder your mother. This is where having a research partner helps, because you can debrief the interviews so in a way that allows you to conduct the next one!

What factors contribute to the divide between opportunities for African Americans and Whites?

Access to the opportunity structure–from the beginning of life and continuing all the way until death. African Americans are twice to five times more likely to die before their first birthday than Whites, mostly as a result of poverty and lack of access to health care. In Forsyth County the infant mortality rate for African Americans is twice as high as for whites, but in many counties in Mississippi, especially those that are the most racially segregated, the infant mortality rates for African Americans are higher than for every single country in the Western Hemisphere except Haiti, the Dominican Republic, Guyana and Bolivia. Fifty percent of African-American children are born into poverty, 70 percent are born to single mothers, many of whom do not get the financial support they are entitled to from the fathers. And, African-American children are more likely than not to attend under resourced schools. In fact, African-American children today attend schools that are more racially segregated than those attended by their parents 30 years ago. Clearly it’s hard to catch up when you start so far behind.

How did your research unveil ways in which social segregation continues?

Our study confirmed that racial segregation persists in housing, education, access to health care and work. The majority of African Americans in Forsyth County live in neighborhoods that are 75 percent African American and the majority of Whites live in neighborhoods that are 85 percent White. For reasons of racial segregation as well as access to private health insurance (as opposed to Medicaid), African Americans are significantly more likely to see physicians that are not board certified and who practice in non-accredited clinics than are Whites. And, most work is highly segregated by race and gender.

Does your research suggest support systems that might help improve the lives of African-American families living in the poorest areas of the U.S.?

We argue for everything from a system of affordable housing to living wage legislation, to access to health care and education. We found that the greatest predictor of poor quality of life for African Americans was racial segregation. Therefore, we advocate open access in housing, employment, education, health care, etc. and that alone would open up the opportunity structure for many African Americans, especially those living at the bottom of the social class hierarchy.

What were your findings with regard to racial segregation and its effects on African Americans versus Whites.

Deafening. As I noted above, racial segregation is deadly for African Americans. The life chances for whites (likelihood of graduating from high school, likelihood of owning a home with some value, likelihood of dying of old age) were not significantly affected by segregation. Whites living in predominately African-American counties were as prosperous as those living in predominately White communities. And, if its not obvious, when Whites live in segregated circumstances–among mostly Whites–there is no detectable negative impact, even for poor Whites.

Among the poorest Americans, those in the bottom 20 percent of the income distribution, Whites own 487 times more wealth than African Americans in the same income bracket. This suggests that the lives of African Americans and Whites are both profoundly shaped by race, regardless of social class, and in opposite directions. Poverty is devastating regardless of the color of your skin, but African Americans are not only more likely to be poor, but they are more likely to struggle with access to education, health care, employment, and homeownership in ways that are more profound than Whites and result in more devastating consequences.

You specifically mention the effects of Hurricane Katrina on the African-American population in New Orleans. What patterns of thinking surfaced in dealing with this disaster? What might be done to prevent this kind of catastrophe from repeating?

The lessons of New Orleans were in many ways not surprising because they paralleled the findings of our census analysis of segregation and its outcomes. One only has to apply the data from our study to New Orleans, a hyper-segregated city–to be able to predict (or explain after the fact) the way the disaster played itself out. Our study of segregation predicted exactly what did happen: that those the least able to “weather” the storm were poor African Americans, but that middle class and even affluent African Americans, who are also forced to live in segregated neighborhoods, were hard hit as well. This was not just in terms of which neighborhoods were flooded, but also who got access to FEMA trailers, who was able to settle insurance claims to rebuild, which neighborhoods saw grocery stores moving back in and hospitals and schools re-opening. Indeed displaced residents of one African-American housing project are still fighting, more than two years after the storm, for the right to go back to their housing units and reclaim their possessions.

Are we ignoring that there is a problem or are we acknowledging the problem but at a loss to find a solution?

I think for the most part we are ignoring the problem. Americans desperately want to believe that the playing field is level and that the doors of opportunity have swung open for all. Most Whites and many conservative African Americans cite the fact that Oprah is one of the most frequently viewed TV shows or the fact that African-American men make millions of dollars a year to play football or basketball as evidence that the system is now open and it is just a matter of working hard at the individual level in order to achieve the American Dream. Yet, our data demonstrate clearly and unequivocally that racial segregation persists (and in the case of education is has gotten worse), that racial discrimination exists (in hiring, in diagnosing illness and offering treatment, and in the criminal justice system) such that race shapes all of our lives, its just that Whites seldom think about it because race shapes their lives in ways that are positive (better access, more opportunities). I think that many/most Whites would like to believe that we can put our painful racial history to rest. But, the presence of nooses all over, the continued persistence of racial discrimination and segregation only confirm that we have a long way to go before we can heal and repair the damage of more than 400 years of a system of racial domination.

How do your students respond to your classes on social stratification and inequality? Are they surprised by the extent of the difficulties?

The African-American students are sometimes surprised, but mostly they report feeling empowered by the opportunity to have open and honest dialog about the continued struggles and blocked access that most (not all) African Americans face.

The White students report being stunned. For the most part they have never had to think about these issues (race, class, gender), the doors have always been open for them (even women), they believe in the American value of equal opportunity and they believe it exists for all. I do want to note though that I have had several low-income White students in my class and they, too, are grateful for the opportunity to talk about class inequality as they, in some ways even moreso than African-American students, feel very isolated and invisible on this campus. I will never forget the day that a White student in my class shared that she was born to and raised by a teenage mother and grew up on welfare. Several of the African-American students remarked that they had no idea that there were Whites who lived on welfare! (And, I’m sure many of the White students were equally shocked!)

If your book could lead to one social change that would benefit African-American families, what would you want that to be?