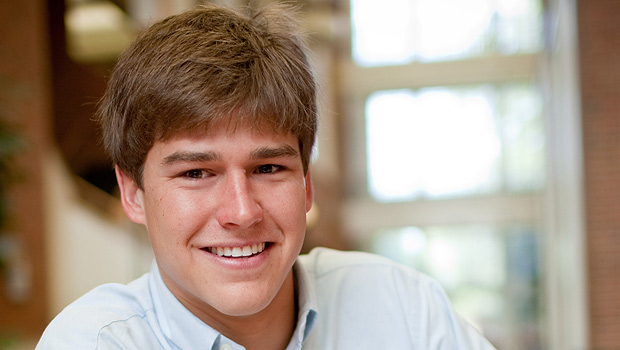 “I e-mailed six or seven physics professors and told them I was interested in doing work in a lab, and the next day, I received six or seven e-mails from professors offering information about their research,” says Nelli, who is attending Wake Forest on a prestigious Reynolds Scholarship.

He soon secured a spot in associate professor Martin Guthold’s lab, where he worked to develop a novel process aimed at discovering short segments of DNA to be used as drug- delivery molecules. Thanks to a fellowship award, he continued his research the following summer, spending 8 to 10 hours a day in the lab. “I really got to experience the highs and lows of lab work, including grant proposals, project direction and collaboration needs. When we had a good week, we’d celebrate with lunch out on Friday or a cookout at a professor’s house.”

Nelli, a native of Gastonia, NC, says he asked for and was given responsibilities in the lab beyond what he imagined possible. “My professors were supportive and encouraged me to move the project where I thought it should go.” That turned out to be the University of New South Wales in Sydney, Australia. He undertook an independent study project there to synthesize gold-coated iron oxide particles to be used in electrochemical measurements and drug delivery. A sophomore at the time, he was nervous about going to Sydney with no place to live and knowing no one, but the experience was a success.

The next fall he traveled to Barcelona, Spain, for more of a cultural experience, rather than a research venture, to determine if he was committed to scientific research over the long-term one. When he returned to campus, he turned his focus back to research and was awarded a National Science Foundation Entrepreneurship grant. He also received a Barry S. Goldwater Scholarship for national recognition in science.

“Patrick is a self-starter. He had modest prior physics experience when he came to Wake Forest, but he now knows more about nanotechnology than many graduate students,” says Thomas O. Phillips (’74, MA ’78), director of the Wake Forest Scholars Program. The Wake Forest Scholars program helps prepare undergraduates and recent graduates to compete for a wide range of nationally competitive post-graduate scholarships and fellowships. “Patrick could qualify for any number of programs leading to a Ph.D. in physics, but he’s not sure that is the path he will choose. He could become an entrepreneur of a high-tech startup or a JD/Ph.D. patent attorney.”

This past summer, Nelli began working with researchers at the Wake Forest School of Medicine and the Center for Nanotechnology and Molecular Materials. “Dr. Phillips fosters my development and continues to guide me as I make choices about my future,” says Nelli. “Many things are made possible by Wake Forest. They’re encouraged, but not forced on you. I enjoy having the opportunity to be flexible, and my professors and mentors realize that I’m always adapting and changing. I have no idea exactly what I’m going to do, but I do know what aspects of life I want to include in my post-graduate experience, and Dr. Phillips is one of the people I can look to for guidance.”