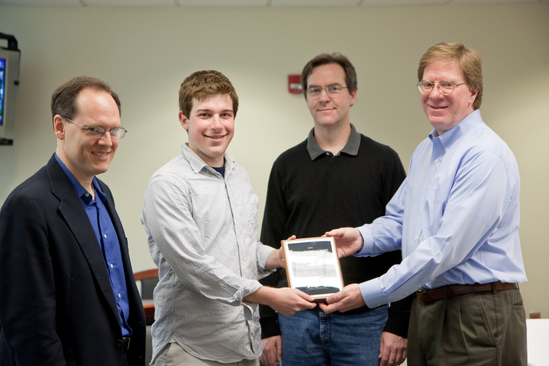 Matthew Higgins, a mathematical economics major from Yardley, Pa., is the winner of the first annual essay contest sponsored by Wake Forest University’s BB&T Center for the Study of Capitalism. Higgins, who will graduate May 18, received a $1,000 cash prize for his winning composition.

The essay contest was open to all Wake Forest students and blind-reviewed by a committee of faculty from various departments. In their essays, students were asked to discuss their beliefs about “the scope of government action to ensure freedom” in consideration of the 2008-09 crisis in financial markets.

“Milton Friedman wrote and many social scientists agree that all personal and political freedoms stem from basic economic freedom,” Higgins stated in the essay’s conclusion. “Basic economic freedom can only exist if a functioning economy is in place, and a well functioning economy is dependent on the trust and investment that flows from a well-ordered financial market. As such, the scope of government intervention should be to do all that it can to ensure that trust and investment are again present in the financial sector, so that the global economy is once again able to guide itself to the market-determined optimal outcome.”

Page West, director of the BB&T Center for the Study of Capitalism, described Higgins’ essay as “insightful and balanced.” West is a professor of strategy and entrepreneurship and BB&T Fellow in Capitalism and Free Enterprise. “Matt’s essay argues for a useful distinction between personal and political freedom, usually associated with pure capitalism, and freedom from significant negative consequences resulting from epic macro-economic system breakdowns, West said. “This is a more nuanced approach than what is typically discussed in debates over capitalism.”

The BB&T Center for the Study of Capitalism was established in 2008 through support from BB&T Foundation. The goal of the center is to engage faculty, undergraduate and graduate students, as well as the public, in a serious and sustained examination of the philosophical foundations of capitalism.