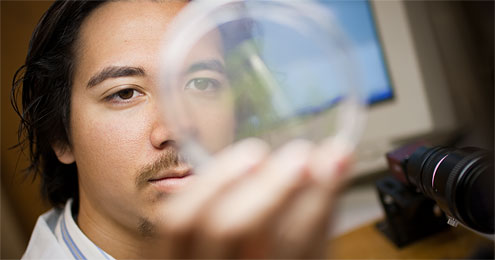 Not all species would survive spending 40 hours a week in a lab, but this summer, senior Kevin Cooper is thriving there. As one of only 15 students nationwide to be awarded a Summer Undergraduate Fellowship (SURF) from the American Society of Plant Biologists (ASPB), he’s developing strong roots that will help him as he applies to graduate school in the fall. The funding supports Cooper’s research in plant molecular biology and a trip to the ASPB convention in Montreal, Canada, next summer.

An idea becomes a reality

Cooper, a Jackson, Tenn., native, is conducting experiments on one particular gene that’s involved in determining plant root architecture. “It’s a small piece of the puzzle, but it’s my piece. This summer’s project will be, start to finish, my own. I had an idea of what I wanted to do and with help from my professors, I was able to pull it all together — and I didn’t have to compete with hundreds of other students for a place in a lab.”

Working with a faculty mentor

Cooper is working in biology professor Gloria Muday’s lab. Muday’s research focuses on plant biochemistry, in particular, the role of the plant hormone, auxin, in plant growth, development and response to the environment.

Spending virtually all day, five days a week, conducting lab work is an opportunity for students to sample what graduate research is like, and it often makes or breaks plans. “I expect that Kevin’s experience this summer will cement his commitment to a career in the field,” says Muday. “Kevin has defined a new research direction for his project this summer, but the work also connects with and will contribute to ongoing projects in my laboratory. My hope is that he will contribute experiments to a scientific paper, as being an author on a published research article will increase his competitiveness for graduate school.”

Part of Cooper’s work involves pipetting tiny amounts of substances into small wells. It’s work he says requires patience, mental focus and steady hands. “To conduct these kinds of experiments during the regular academic year would have been impossible,” says Cooper. “During the summer I don’t have to stop what I’m doing to run to class or study for a test, and that’s a big benefit.” As a double major — biology and political science – it’s more difficult for Cooper to find time in the lab during the fall and spring semesters than the average biology major. “I’m passionate about political science,” he says, “but it’s more of a special interest. Biology is my chosen career path. If I can someday combine these two pursuits in an interesting way, that would be great, but my goal is to become an accomplished biologist.”

Cooper integrated lessons from his two majors when completing the SURF application. The writing and reasoning skills he has honed on papers for his political science professors certainly helped him craft his award-winning research plan. Cooper also credits Muday with helping him fine-tune his application — outlining why his research work is important, how the work is to be conducted and any budgetary requirements. “It wasn’t a problem describing what I wanted to do or how to do it. The difficulty was limiting it to one page. It’s hard to keep taking pieces out and still make a strong presentation. That’s where Dr. Muday’s experience was invaluable.”

Though the full-time stipend is the premier benefit of the SURF, Cooper is excited about the opportunity to present his abstract in Montreal next summer. “By that time, I’ll already know where I’m going to grad school. I’ll get to attend the biggest convention of the year in plant biology and network with the best and brightest minds in the field—my colleagues.”