Universities and colleges are communities that extend beyond faculty, administrators, staff, students and alumni to our families and friends. The quality of our intergenerational compact is annually refreshed by our admissions policies and practices. When we select our students, we are selecting the face of Wake Forest for today and tomorrow.

Wake Forest has taken the bold step of becoming the first highly ranked national university to select its students with criteria that move us beyond the pitfalls of standardized tests. Like all very selective colleges and universities in the United States, Wake Forest has used the SAT as a key criterion in our admissions’ decisions for quite some time. We have always striven to select an academically excellent, multi-talented, and diverse undergraduate body. Yet, as we have become more competitive within the top tier of America’s best universities, we have become increasingly mindful of the shortcomings of SAT driven admissions. We have become convinced that the SAT is a weak measure of academic ability, and when we rely on it we pay a price. By misevaluating our students’ academic strengths, we undercut our diversity and talent pools.

Events at the University of California between 2001 and 2005 made us aware of the inadequacies of the SAT. California was the last highly ranked national university, before Wake Forest, to distance itself from the SAT. Thanks to the University of California the old SAT with its verbal analogies was discarded by the ETS as of March 2005; California voted to discontinue using the SAT as of that date, and rather than lose its biggest customer, the ETS discarded the old version and created a new test.

California arrived at the decision to drop the old SAT through a reexamination of its admissions criteria that was forced on it by the elimination of affirmative action. Race and gender were excluded as valid concerns for admissions by a vote of the Regents of the University of California in 1995, and then by the electorate passing Proposition 209 in 1996. After 1996, the university looked for alternative ways to sustain its diversity by reexamining its remaining admissions tools.

California’s President, Richard Atkinson, asked researchers on its Board of Admissions and Relations with Schools (BOARS) to reevaluate California’s criteria for selecting undergraduates. BOARS’s statisticians, Saul Geiser and Roger Studley, discovered that the SAT did not perform as advertised. It did not strongly predict college grades.

Geiser and Studley investigated the role of the SAT in admissions by examining four entering cohorts, with an approximate total of 78 thousand undergraduates, matriculating at California from 1996 to 1999. They found that high school grades (HSGPA) and subject specific tests, such as the SAT II, strongly predicted college grades, but not the SAT. In two of the four years they researched, the SAT was not a statistically significant variable in their multivariate regression models for predicting grades. For the two years it did show a weak correlation, the SAT’s contribution looked more spurious than substantive. The SAT seemed to matter most when one did not include information on family income and parents’ education. Once socioeconomic status (SES) variables were made part of the regression model, the SAT contributed nothing of value to BOARS’ ability to predict grades for any of the cohorts under scrutiny. However, the inclusion of SES variables in the model did not have the same nullifying impact on HSGPA or subject specific tests, such as the SAT II; these continued to be statistically significant predictors of college grades even after one inserted family SES variables in the model. SES differences do not reduce HSGPA or subject test, SATII, effects, but they do reduce SATI effects to an extent not worth noticing. The following table reproduces the regression model results of Geiser and Studley’s 2001 study. 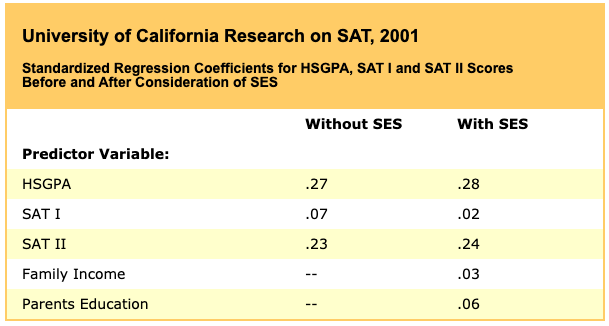 In 2007, Saul Geiser and Maria Veronica Santelices, revisited the question of the SAT, HSGPA, SES and academic outcomes. They noted that, “SAT scores exhibit a strong, positive relationship with measures of socioeconomic status … whereas HSGPA is only weakly associated with such measures”(2007: 2). When one statistically controls for SES, the weak contribution of the SAT in a regression model drops down to near zero, while the statistical significance of HSGPA and subject achievement tests goes up. The cost of adding the SAT to the model is to stack the odds against under-privileged youths.

In sum, California found that the SAT correlated with family income more powerfully than with college grades. California showed that high-school grades were a better predictor of college performance than the SAT I, and that the correlation of HSGPA with college grades grew over the course of the undergraduate’s education; HSGPA was an even stronger predictor of students’ college GPAs in their senior year than it was of their freshman grades.

The news was shocking and led the Faculty Senate to request background information on California’s relation to the SAT. Archival research into the history of admissions, in particular by John Aubrey Douglas of Berkeley’s Center for the Study of Higher Education (see his book, The Conditions for Admission, Stanford Press, 2007), found that BOARS had repeatedly in the past rejected the SAT as a valid measure of academic performance. Research conducted by BOARS again and again, in 1955, 1958, 1962, and 1964, showed the SAT contributed nothing to California’s ability to predict the academic performance of applicants. California adopted the SAT in 1968 for the wrong reasons: not to predict academic performance, but to show that it could compete with Harvard and other high prestige universities — and to ease the bureaucratic exclusion of baby-boomer youths in a seemingly ever-rising applicant pool.

Other universities were also searching for alternative admissions’ strategies. The University of Texas adopted in 1997 to very good effect a 10% solution; it admits everyone in the top 10% of a Texan high-school-senior class without any consideration of the SAT. Social scientists have drawn on the Texan experiment to establish that if we set aside the SAT, and rely on high school grades and class rank instead, we can get academically excellent and diverse students. The only “academic measure” that stands in the way of us getting racial minorities and lows SES white youths with high academic ability, is the SAT.

Large state universities are not the only institutions investigating this issue. Research on the role of standardized tests at elite private colleges has arrived at similar conclusions to those drawn by statisticians at California and Texas. My book, The Power of Privilege: Yale and America’s Elite Colleges, Stanford University Press, 2007, examines admissions from the perspective of top-tier private institutions. Recently, the Chronicle of Higher Education published a review essay on four new books on college admissions, stating that, “Of all the authors, Soares is the best at explaining the statistical applications of the numerical measures used in the admissions process and why a student’s ACT or SAT scores are not good predictors of his or her freshman GPA at the most competitive colleges.”

The moral of this story is clear. The SAT is not a good predictor of academic performance, but it has been a reliable indicator of family income. For too long, universities have used the SAT to keep up with the Joneses, and in the process, due to the SAT’s correlation with family income, we have ended up with more and more privileged undergraduates.

Provost Jill Tiefenthaler’s letter announcing Wake Forest’s new policy reviewed the positive experiences of a handful of top liberal arts colleges with SAT-optional admissions for a number of years now. It is worth underscoring that Bates College found no meaningful differences in the college grades or graduation rates of undergraduates admitted without or with SAT scores, while Hamilton found non-SAT submitting students had higher GPAs than their SAT-score-submitting peers. All SAT-optional top liberal arts colleges have experience a jump up in their application pool size, and have been able to increase their numbers of racial minorities and low SES students.

Making the SAT optional is a win-win situation for us. It allows us to tell the truth about the SAT: that it is not the gold standard for predicting college performance — insofar as any academic measure does that, it is HSGPA. And SAT “not required” admissions will give us greater social diversity and academically stronger students.

College admissions have never been, and likely never will be, exclusively determined by academic factors; many other valid considerations, from social diversity to special talents, enter into our decision. The academic variables we do use, however, should be real measures of intellectual performance. Wake Forest is committed to looking at the whole student, beyond unreliable test scores, and our new policy empowers us to do that.

In the following, I will identify and sometimes comment on relevant items that can be found on the web or through a library search.

Professor David Mustard, one of the authors of this study, informed me in an e-mail, that the new SAT adds only one percentage point of predictive power to the explanation of college grade variance over what we know using HSGPA, AP grades, and SES.