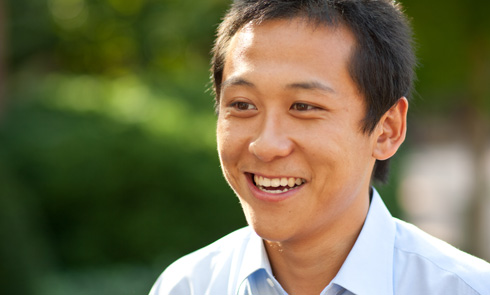 Why did you decide to get involved?
My mother told me the story about the loss of five friends of my grandparents in the Tangshan earthquake after she heard about the devastating news from Sichuan. She recalled that five of the six members from that family died in the earthquake in 1976, and the only survivor suffered post-traumatic stress disorder for the remainder of his life. The devastating effects of an earthquake on individual families motivated me to strive to ease the suffering of those in the Sichuan earthquake.

You have been deeply affected by the suffering of the families of school children there?
As most people know, China has a “one-child” policy that is aimed at curbing population growth. This one child becomes the symbol for the parents’ dreams and aspirations, and consequently, the parents invest everything they have into the success of their child. This is even more so in the rural regions where the earthquake hit, because the child is the only hope for that family to escape poverty. When dozens of school buildings collapsed, they stole that single hope from many families. Though I cannot imagine the emotional suffering of those parents, I understand the reason for their despair. This has motivated me to help ease their pain by contributing to the relief effort there.

How did you come up with the idea to host a benefit concert?
My mother set up a donation box at work for the Red Cross Society of China. And my brother spoke at his high school graduation ceremony and asked people to contribute to the relief effort. I talked to friends about possible ways to mobilize students and faculty, and the idea of a benefit concert stood out. The concert will include performances by Chi Rho, Minor Variation and Demon Divas. Members of these groups care deeply for the well being of the people in China, and are very enthusiastic about participating. There will also be two speakers who will discuss the impact of the earthquake on the region as well as on individual families.

What kind of support did you have?
All three a cappella groups agreed to perform right away, and have given me excellent advice on the format of the concert. Sam Smartt from Chi Rho helped me make a mini-movie for the concert, because I am not tech-savvy at all. Jermyn Davis from Student Government and Wesley Johnson helped me generate publicity for the event. Without the generous support of the Wake Forest community, the benefit concert would have not been possible.

How do you plan an event this large and keep up with your academic work and extracurricular activities.
It turned out to be more challenging than I first anticipated. I often found myself going from meeting to meeting non-stop on some days. It was a little tough balancing the time between activities and academics in the beginning of the semester, but I have worked on using my time more efficiently. Also, less TV has helped squeeze a little more time for other activities.

What do you hope that those who attend the concert will take away with them?
The Wake Forest community takes pride in serving humanity and, as one of its proud members, I have tried to fulfill that mission by helping those in need in China. I hope the concert demonstrates the University’s commitment to the well being of people not only in Winston-Salem, but also to those around the globe. No matter how far apart we are from each other geographically, we can and should always lend a helping hand to those in need. Furthermore, the mission to help others does not end here at the conclusion of the benefit concert, but should continue on in the spirit of our motto: Pro Humanitate.