The mathematics of voting 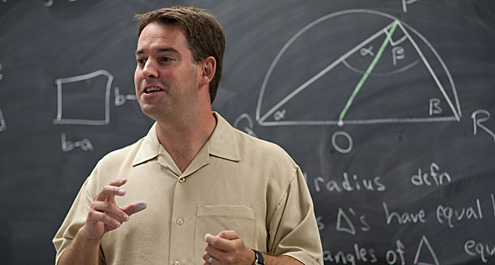 Assistant Professor of Mathematics Jason Parsley is teaching a first-year seminar this fall, The Mathematics of Voting, examining the structure and geometry of voting systems. Parsley earned his bachelor’s degree in mechanical engineering and materials science from Duke University and his master’s and Ph.D. in mathematics from the University of Pennsylvania. He joined the faculty in 2006.

Is this class just about the election?

No. We’re looking at the theoretical aspects of voting. You vote not just in elections, but also when a group of people makes a decision about what movie to see or what pizza toppings to order. If you only have two candidates, deciding who wins is pretty straight forward; the most votes wins. Once you have three or more candidates, all kinds of things can happen. It doesn’t mean politics doesn’t enter our course, but I hope to go the whole semester without my students figuring out whom I’m voting for.

I know Arrow’s Impossibility Theorem figures into the course; can you explain that?

Arrow was an economist, and the theorem pulls from political science, economics and mathematics. The theorem is from the 1950s, and he won the Noble Memorial Prize in Economic Science in 1972. His theorem states: except for a dictatorship, any voting system among three or more persons must inevitably fail one of a few natural criteria (I’ll explain natural criteria later). Let’s say you have five candidates. The first candidate gets 30 percent of the vote, but everyone else hates that candidate. The other four candidates are similar to each other and split the remaining votes evenly. Our plurality system says that the most votes wins, so we would elect the one that received 30 percent of the vote, even though 70 percent of the country despises him.

A real-life example of this was the Minnesota governor’s race in 1998 when Jessie Ventura was elected. He received 37 percent of the votes. The other two candidates, Norm Coleman and Skip Humphrey, split the remainder of the vote. Polls showed these voters thought Ventura was the worst option. So Ventura was elected even though more than 60 percent thought he was a bad choice. Without a runoff system, you can elect someone with a small percentage of the vote.

So runoff elections are the answer?

Not necessarily. Runoff elections are very expensive, and very few people vote. A runoff election avoids the issue above, but still fails to satisfy some natural criteria.

What do you mean by “natural criteria?”

Arrow listed five criteria. First, independence from irrelevant alternatives, or does the presence of a third candidate affect the race. In the example of the Minnesota governor’s race, it does; if Humphrey wasn’t in the race, Coleman would have won against Ventura.

Fourth, is the concept of universality; there are no restrictions on how you rank candidates. A violation of this would be a system that makes you rank the incumbent first or second for example.

But does monotone ever happen in a real election?

In very rare instances, it could happen with the instant run-off election.

But I’ve heard you say that you think the instant run-off election is the best system?

Yes. North Carolina has used this in some municipal elections. In this system, you rank your first place choice, your second place choice and your third place choice. Its main advantage is you can vote for a third party candidate without feeling that you wasted your vote. In an election between Ralph Nader, McCain and Obama, say you really want to vote for Nader, so you can do that with this system, but you also indicate whether you prefer McCain or Obama.

Maybe its biggest disadvantage is a practical one. Our voting machines are not set up to count multiple votes. That should be easy to solve; you reprogram machines or buy new ones. However, purchasing new machines is very political and expensive.

What do you think is the most accurate way to vote?

Obviously teaching this class during an election year has a lot of advantages. I understand you’re looking at polling data?

Yes, we’re actually conducting our own exit polls in Forsyth Country. We’re looking at some local races and the races for governor, U.S. Senate and president. North Carolina is a battleground state this year, and Forsyth County is a battleground county. The students are learning what parameters to control for, such as race and gender, in looking at data. It’s a really good introduction to the veracity of data. I wouldn’t be surprised if our results are way off, but that would still be a good learning experience, in figuring out what went wrong.

What are your feelings about the Electoral College?

A lot of people believe the Electoral College was a guiding principle our forefathers wanted. In reality, it’s very much a compromise between one faction that wanted a direct popular election for president and another faction that wanted Congress to elect the president. When framing the Constitution, they couldn’t agree and comprised on the Electoral College. No other country has anything like it.

In my class we study it from a weighted-power viewpoint — meaning, do voters in a small state like New Hampshire have more of a say in electing a president or do voters in a big state such as California. Another example of a weighted-power system, let’s say you have three stakeholders who hold 99, 100 and 2 shares of stock, respectively. Any two of them form a majority. Therefore all three stockholders have equal power, despite the fact that two of them have many more shares than the third one.

And your class also studies how the U.S. House is reconstituted every 10 years?

North Carolina recently gained a 13th seat in the U.S. House because the state’s population is growing. Meanwhile, some of the Rust Belt states are losing seats. Jefferson, Hamilton and Daniel Webster had different methods for apportioning House seats. It’s a very interesting historical topic, and it fits very neatly into math and voting. And it doesn’t have a great answer. Different methods produce different results. They are all based on population, but the question is how do you round? One state will be overrepresented, one state will be underrepresented.

When I taught this course last spring, we saw this in the Democratic primaries. Each student investigated a Super Tuesday state, and examined the rules for that state. How the delegates were apportioned differed by state. This led to some weird situations where one candidate could win more votes, but the other candidate would win more delegates. This complicated process can cause the public to loss faith in democracy. If you receive the most votes, you should receive the most delegates.

And students are conducting their own election on campus?

One system we used was plurality rule; whoever gets the most votes wins. Another system is the Borda count. It’s similar to how the top 25 teams are ranked in football polls; your first place choice gets so many points, your second place choice gets so many points and so on. You total up all the points and the team with the most points is ranked first, the team with the second most points is ranked second and so on.

Another method examines each pair of candidates; Do voters like Sleepy better than Doc? Doc better than Grumpy? There are other methods that get more complicated.

So who won the mock elections?

M&M cookies were voted the favorite dessert and the favorite meal in the Pit, under every method. The favorite floor of the library to study on was the fourth floor. Dopey edged out Doc as the favorite dwarf, but Happy also did well under some voting methods. The one that had the most different winners, depending on which voting method used was what wild animal would you like to have as a pet. The winners were a panda, koala, kangaroo and tiger.

What will your class do after the election?

It’s nice that the election occurs near the end of the semester. We’ll be taking polling data on election day and analyzing that for the next week or so. Then the students will pick a topic related to voting: weighted voting, felon disenfranchisement, apportionment or redistricting, and write a final paper.

And if the election isn’t decided on election day?

For the country’s sake, I hope that doesn’t happen again! But if it’s 2000 all over, we would have plenty to talk about.