Economic policy: What to watch for in the new administration 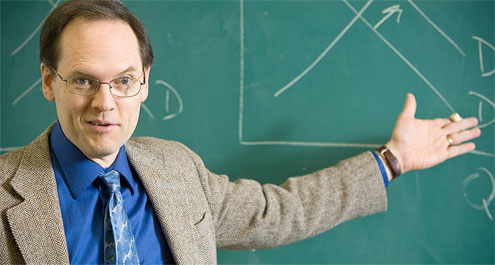 Economics professor Robert Whaples says forget about finding someone to blame for the economic crisis, and instead focus on government debt, free trade and an energy policy.

By Robert Whaples
Professor of Economics

It’s important to realize that most economists believe the U.S. economy is fundamentally in very good health — even though it’s been running a bit of a temperature lately. The U.S. has about the highest output and income per capita in the world and has grown strongly over the past generation.

The vast majority of economists believe it will continue to grow into the foreseeable future, doubling inflation-adjusted incomes every 40 years or so. These strengths are tied to continued investments in new plant and equipment, a hard-working and skilled labor force, and the incentives we’ve given businesses to innovate and improve their productivity. Panicky behavior in financial markets and sagging consumer confidence can temporarily stall this economic growth machine — but not for long.

It is unfortunate that this fall’s financial panic hit at the peak of election season, because the uncertainty and rhetoric of the election probably only heightened the panic. My sense is that the problems in the financial sector have already hit bottom.

Both parties favor continued economic growth and the policies that encourage innovation and investment have bipartisan support. Crediting or blaming presidents (or Congress) for the expansions or recessions that occur during their terms is a staple of politics, but there’s little economic sense in doing this. Jimmy Carter’s term saw soaring inflation and unemployment, but his policies were probably not to blame. He was dealt a bad hand.

Likewise, it’s virtually impossible to pin the recent slide toward recession on the policies of George W. Bush, as they were driven largely by forces that presidents can’t control. (Most economists agree that the financial panic was caused by too much lending to sub-prime housing borrowers, something that Congress strongly encouraged.)

The new administration and Congress have promised both tax cuts and increases in spending in many areas. This will only increase borrowing by the government. The federal government’s official debt as a percentage of GDP isn’t all that high by historical or international standards, but many of the government’s implicit promises — for programs like Social Security, Medicare and Medicaid — dwarf the official debt. Based on current government policies and promises, the gap between projected future spending and projected future tax revenues is about $70 trillion dollars.

Every election cycle our elected officials of both parties seem to ignore this problem while focusing on shorter-term worries, but the longer they ignore it, the bigger the problem gets. If this gap isn’t eventually closed, the credit rating of the U.S. government will be shot or taxes will have to be increased substantially or spending on popular programs will have to be drastically cut. The new administration plans to expand government promises, so I expect this fiscal gap to continue rising.

Here are three other policy shifts to keep an eye on:

Robert Whaples is chair of the economics department. He regularly teaches classes on current economic issues and American economic development.