Obama’s impact on the Supreme Court 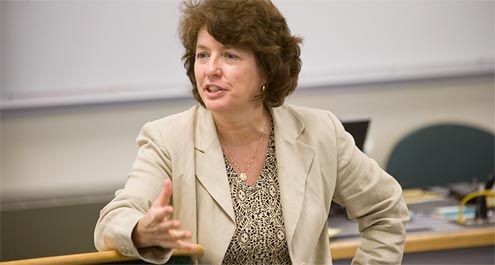 Barack Obama is likely to make “safe” appointments to the Supreme Court that are unlikely to significantly change the make up of the court, writes professor Katy Harriger.

By Katy Harriger
Professor and Chair of Political Science

One of the significant powers of the presidency is the ability to make Supreme Court appointments, and yet in most presidential elections, including this one, that issue receives little attention in the media coverage of important issues. The potential for President Obama to have a significant impact on the make up of the Supreme Court is less than it would have been for a President McCain because of the current make up of the court.

On the other hand, had McCain won, his opportunity to replace these same judges could have shifted fundamentally the balance of power on what is now a closely divided Court. Obama’s ability to re-shape the Court ideologically depends upon his ability to serve two terms. A two term presidency increases the odds of more appointments across a wider array of justices.

Ideologically, Obama appointees are likely to be much like Clinton nominees — lawyers with very good reputations in the legal community for intellect and fairness but who also have a resume that suggests support for progressive policy. Demographically and professionally they might look somewhat different. While Clinton plucked Justices Ginsburg and Breyer from the federal bench, where they had an established judicial record, it might be that Obama will consider other career paths.

For some time now legal scholars and members of Congress have been arguing that the Court is too full of “law professors,” who are out of touch with how the political world actually works. They have argued that we need some judges with more practical political experience. It also seems quite possible that Obama will seek to make the court more diverse, moving beyond the racial and gender tokenism currently represented.

Of course, any justice that Obama nominates must be confirmed by the Senate. At least initially, the size of the Democratic majority there should aid in his ability to get his nominees confirmed. Since it doesn’t appear that that majority will be filibuster-proof (60) however, he will need to at least consider how Republican Senators are likely to respond to his nominee. That reality will encourage him to follow Clinton’s lead in making “safe” choices rather than controversial ones.

Katy Harriger is an expert in American Constitutional Law and the Independent Counsel law. She joined the faculty in 1985.