“On Appropriate Acts of Remembrance”

According to sociologists, our identities are formed, in part, by the memories created and transmitted by society. Termed “collective memory,” it has two facets — memory content and memory packaging. Memory content is simply what is being remembered; memory’s packaging are the ways memory is narrated, how events are plotted. Sociologists, such as Eviatar Zerubavel, argue there are normative ways of remembering that are channeled through places like educational institutions and museums. The narrative form shapes the content, filtering what is to be remembered and what is not. Memory is not confined to the individual mind; it lies in language — whether verbal, written, or pictures. With this insight, we can view our understandings of the past as socially “mapped,” or put differently, society maps the way time flows in our minds. The historical meaning of past events comes from our sense of their relation to other events, or their “emplotment.” Some conventional plot structures are, particularly with regard to matters of race, “progress,” that is, it is assumed that we are always moving towards some end of its existence. 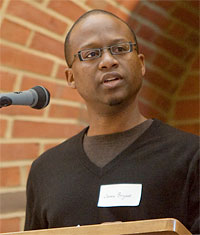 Bringing attention to this significant tradition of sociological thought might be useful for framing our manner of lifting Dr. Martin Luther King Jr. from his historical context of the racially turbulent 1950s and 1960s, and placing him into our own moment for purposes of remembering. The King holiday is intended to accomplish this is some respects. It is designed to synchronize memory into a single flow, but as it does so, the holiday has become part of an apparatus that erases aspects of King that may disturb our notion of progress. Metaphorically speaking, the holiday has become like an oyster shell without its pearl.

The holiday itself is included in an industry of remembering, which is evident in the disjointed ways we think about King’s supposed “dream.” For example, the idea, which emerges from King’s historic address during the 1963 March on Washington demonstration against racial segregation, has been adopted by conservatives and liberals alike, who assimilate it into their own political platforms. In this moment, it appears that we have all constructed a narrative form of sorts as we have approached this momentous occasion of the inauguration of Barack Obama as 44th president of the United States. The narrative form looks like this: (1) Dr. King’s “Dream” envisioned a country where economic and political opportunities would be available to all citizens; (2) Dr. King’s “Dream” is closer to realization — if not completely realized — because our nation has elected a president of African decent. This narrative form situates Dr. King as the visionary of this very event, an event that is ambiguously situated between a history of African-Americans eclipsing insurmountable barriers of racism, and the nation’s larger trajectory of providence in the global order. The narrative form turns attention from the system Dr. King stringently, brilliantly, and courageously criticized in the name of freedom, to the competitive efforts of African-Americans to assimilate into it.

Given this socially appropriate way of remembering, adding different evidence about “King’s Dream” would only add more content to a preexisting, accepted narrative form. The media’s suggested similarities between Dr. King and President Obama have captivated our imaginations this entire weekend — their charisma, their astounding verbal prowess, their seemingly natural leadership skills. The comparisons tend to fold into how Dr. King cleared a path for President Obama through his style and creation of unimaginable possibility. This fits naturally within a narrative form of advancement. However, identifying differences between these two historic figures may worry the progress narrative we hold to in matters of race. We might consider the following three.

First, President Obama has positioned himself as a “unifier,” as one who can bring together different, even contentious, constituencies. He is a “globalized” figure of sorts: raised in Indonesia and Hawaii, educated in Los Angeles, New York City, and Massachusetts; and, worked in Chicago and Washington, DC. His globalized identity has allowed him to comfortably place himself as an experiential resource for minimizing divides at the forefront of the nation’s consciousness — conservative or liberal, religious or non-religious, black or white. President Obama has been brilliantly adept at seizing this time of clear fracture. On the other hand, Dr. King was not a unifier, but a transgressor, irritant of a social order widely perceived as just because of the supposedly provable inferiority of African-Americans. Dr. King’s vision of America was of a time where racial integration was not superficially sharing the same space, but joining together in the same memory and morality, two things separated by the different experiences of skin color. In his book,Why We Can’t Wait, Dr. King proposed an “interrelatedness of all communities and states,” an “inescapable network of mutuality, tied in a single garment of destiny,” a view of the “beloved community.”

Second, the specter of Abraham Lincoln loomed large over narratives surrounding these two men, but there are clear differences. Dr. King’s Lincoln was a reference point for the first emancipation of African-Americans, as well as a representation of the country’s unfulfilled ideals. In Dr. King’s vision, slavery symbolizes two things: (a) the peculiar location of African-Americans in the nation’s social and economic order, and (b) a moral flaw in the nation’s very political and economic infrastructures, and cultural intelligence. Many mainstream narratives of American life call for relegating any discussion of slavery as one of “victimhood,” instead of as a national stain, a way of considering its full capability of rationalizing gross forms of dehumanization. President Obama’s Lincoln, at least at this point in time, is not so much the “great emancipator,” but a professional mentor, a historical, surrogate father for proceeding as a leader. His Lincoln has instructed him on emphasizing literary eloquence in his oratory, and choosing members of his cabinet.

Lastly, the confluence of racial identity and religious identity seems an important point of distinction between these two men. Listen to President Obama himself, as he narrates his conversion experience inDreams From My Father:

“And in that single note — hope! — I heard something else; at the foot of that cross, inside the thousands of churches across the city, I imagined the stories of ordinary black people merging with the stories of David and Goliath, Moses and Pharoah, the Christians in the lion’s den, Ezekiel’s field of dry bones. Those stories — of survival, and freedom, and hope — became our story, my story; the blood that had spilled was our blood, the tears our tears; until this black church, on this bright day, seemed once more a vessel carrying the story of a people into future generations and into a larger world … I … felt for the first time how that spirit carried within it, nascent, incomplete, the possibility of moving beyond our narrow dreams.”

This experience occurred, as we all well know by this point, within the sanctuary of Trinity United Church of Christ in Chicago, pastored by Reverend Jeremiah Wright. A Washington Post editorial from last Sunday claimed that President Obama’s path to faith was “eclectic,” but this is nothing more than a revision of President Obama’s own autobiographical reflections, a political maneuver to sanitize him for anxious audiences. The President Obama we now know has done a fair amount of work to distinguish, at least to the American public, his racial identity from his religious identity by claiming a religious pluralism. For Dr. King, however, the confluence of racial identity and religious identity was paramount. It led him deeper and deeper into the ways America dehumanizes its citizenry, particularly its economic system. Always, he returned to the meaning of slavery because within it lay the very meaning of American freedom.

We might think about Dr. King as a fearless pilgrim searching through each of the paradoxical ways America speaks of individual fulfillment and liberation while systematically marginalizing large pockets of its citizens through arbitrary markers of exclusion, such as race and class. In the four years of his life after “I Have a Dream,” Dr. King began to consider another form of emancipation, one that went to the heart of our very being as economic animals. This Dr. King would understand that African-America embodies the weight of any national economic crisis. He would have projected the severe effects of the “mortgage meltdown” on African-America, for example. According to an article by Kai Wright in a June issue of The Nation, during the first quarter of 2008 in Dr. King’s own Atlanta, there was a foreclosure of 18,000 homes, many of them owned by African-Americans. This occurred in an economy where home equity is the source of most black wealth lies. Excluding home equity, “black net worth in 2004 was just 1 percent of that of whites.”

While President Obama may symbolize progress of a sort, he is only one verse in a much longer hopeful “song … that the present has brought us” — the narrative form we adopt to make sense of him and ourselves seems to hide what the “dark past has taught us.” Deep within our memories of the Dr. King we celebrate this week is a dark past that continues to call for freedom.