It is a great day to be an American!

Thank you for coming to the Z. Smith Reynolds Library to help celebrate Dr. Martin Luther King’s birthday as well as the inauguration of Barack Obama, the 44th President of the United States. 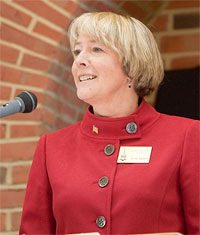 We are holding this event in the library atrium because three years ago, Wake Forest student-athlete Micah Andrews read Dr. King’s “I Have a Dream” speech in this very place. It was a stirring, inspirational performance to all of us who were there but none of us guessed that three short years later, at least part of Dr. King’s dream would be realized with the election of the first African-American president of the United States.

No matter how one voted on November 4th, few can deny the historic nature of the election and the euphoria that gripped the planet with the realization that this great country had once again proven that it could be better than itself.

I got the idea for this program on election night as the world waited for the new First Family to step onto the stage at Grant Park in Chicago and I saw that old warrior, Jesse Jackson, break down in tears. Some of you will remember that Jesse Jackson was in the parking lot below the balcony where Dr. King was shot that awful day in Memphis in 1968. Jesse knew what this election meant.

The day after the election, I read on the Wake Forest Web site Dr. Tony Parent’s elegantly beautiful essay “What to the African American is the Fourth of November?” inspired by a similar question asked by Frederick Douglass 150 years ago. Tony knew what this election meant. And so, my library colleagues and I decided that the best way to celebrate Dr. Martin Luther King’s birthday was to select a panel of faculty, staff and students to offer their personal reflections on what this election means to them and to the rest of the country.

Read the speeches and essays: