A Letter to Dr. King

It is with joy that I write to you on this very historic and momentous day for all of America. I am certain you would have loved to have witnessed this day, for it brings hope to America and fruition to your dream shared with us in August of 1963. With today’s inauguration of President Barack Obama, America shows the world that, finally, maybe we get it; it’s the content of a man’s character by which he can be judged and not the color of his skin. Your dream was a vision for America, offering hope for a troubled and lost country, one desperately in need of direction. The message of hope and change put forth by our new president brings much of the same to America today. With every aspect of his campaign and subsequent election, he’s demonstrated a commitment to diversity, to inclusion and to equal representation for all. 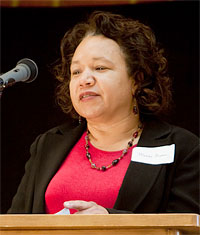 It will come as no surprise to you that Black America is beaming with extreme joy and an overabundance of pride. We know that the very right to vote, as well as the option to seek an elected office, came for us with a hefty price tag, paid for with the bloodshed of many, tears of sorrow, suffering and pain, and, yes, even death. So, in the midst of our celebrations, I am ever mindful of the sacrifices you made and the contributions you gave towards making this day possible. Your push for equality and peace ignited and energized the world.

Dr. King, change has come to America, visible in the lives of many well before the election took place. I saw it all around me and in those closest to me; a sixty year old man registered to vote for the very first time, folks became glued to computers and satellite news channels around the clock following every election move, friends gave up their Saturdays and Sundays to work a political campaign for the first time. I witnessed men and women, eager to capture the significance of the moment, bring grandsons and granddaughters to the polls to watch them cast their vote for a black man. I heard of young black men waiting in long lines at the polls for three and four hours, sporting lots of bling and celebrating already the joy of knowing that their very first opportunity to vote would be for a candidate who looked like them. All around the country crowds of people, filled with every generation, every skin color, nationality and creed, assembled together on lawns and in parks to hear this young Obama speak. Oh what a beautiful sight it was a memory to cherish for a lifetime.

Of the many memorable moments, the one I will never forget happened the weekend following the election. I was visiting my father at his community nursing home to celebrate his 92nd birthday. When I entered his room, we immediately began to talk of the election. He was so proud as his voice echoed, “I thought never in my lifetime.” For some reason that particular day, he didn’t want his wheelchair or his walker, just his cane. He proceeded to extend his 6 foot, 260 pound stature in the most upright position that I had seen in the last two years. The splendor of the moment was only reinforced when, passing the nurses’ station, an assistant asked, “Did Mr. Brown tell you that I took him to vote.” I understood, for my father had often told the story of returning home from fighting on foreign soil during World War II, while still dressed in his military uniform, was denied the opportunity to eat at several restaurants.

So you see, Dr. King, my cup is running over. I am just not quite sure how to convey all the pride I feel today. I seem to be a softy at heart when it comes to Black America and any victories achieved. I am often in awe of just what we manage to accomplish when the odds are overwhelmingly against us. My hope for President Obama is that he, too, will continue to bring great change to America, accomplishing the likes of which no President before him has ever dreamed. Perhaps he’ll bring to American politics some of what Serena and Venus Williams have brought to the game of tennis; a new style, a different sense of fashion and an extra dose of self confidence. Or maybe he’ll be like Tiger Woods who changed the face of golf completely, showing the world that he, too, is a player and one most worthy of the game.

The road ahead for President Obama will not be an easy one. Carrying the weight of the world on his shoulders, his load will be heavy. His election will not be a cure all for America nor for the troubles that face African Americans. Racial injustice is still a part of our struggles. Hate crimes are plentiful, with thousands being reported each year. Symbols of noose lynchings resurfaced just last year. Already this year, two cases have occurred where race is believed to have been a factor in police actions that led to several shootings and even one death. Our prisons are filled with African American males. Those that manage to serve their time, come home to no jobs and no opportunities. Criminality for them becomes a way of life. Many streets are filled with drugs and violence.

Yes, Dr. King, there is much to celebrate with what seems to be going right in America, but cause for concern does remain. It’s hard though not to be optimistic with so much hope in the air and a President who’s working to have a world where everyone has equal participation as well as equal treatment. That, coupled with my faith in God, makes me believe that America will never turn back. The events of this year will serve as fuel to motivate and energize others to become just like you and President Obama; ambassadors for peace, hope and change. Those who will not allow the color of their skin nor the name which they answer to hinder them from accepting the call to purpose and challenge. I know that, within my own city, there are warriors in the field ready to take up the next torch. They, too, have heard the small still voice, seen a vision, know of wrongs they’d like to make right and now find themselves now contemplating their next steps. They, too, will accept the challenge, becoming fully engaged, totally committed, and giving all they can towards improving the lives of others around them. And I promise them that if they accept the call, that we as a people we will get there and in the end, our victories, though bittersweet, will be well worth the journey. Thank you Dr. King for living the example, for sharing your faith and for showing the world the difference one individual can make.

With gratitude to you forever,