Professor of Physics Daniel Kim-Shapiro has been named the first Harbert Family Distinguished Chair of Excellence in Teaching and Scholarship. 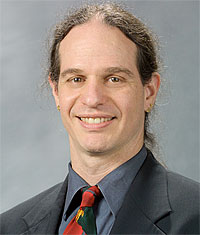 The chair was established by Kathryn and Raymond Harbert of Birmingham, Ala., to recognize an especially accomplished faculty member whose work is of international renown and who is an outstanding teacher. The Harberts are former members of the Wake Forest Parents Council; their son, Raymond (’06), is currently a student in the Babcock Graduate School of Management.

Kim-Shapiro’s pioneering research on sickle-cell anemia and other cardiovascular disorders is well known. He has received several grants from the National Institutes of Health to support his research. In 2007 he received a prestigious MERIT Award from the NIH — the first ever received by a member of the Reynolda Campus faculty — in recognition of the promising nature of his research.

His research focuses on nitric oxide, a signaling molecule that is important in maintaining adequate blood flow, regulating blood clotting and other physiological functions. Nitric oxide dysfunction contributes to many diseases including sickle cell disease, pulmonary hypertension, malaria and stroke.

Kim-Shapiro earned his Ph.D. in biophysics from the University of California-Berkeley and joined the faculty in 1996. He received the University’s Award for Excellence in Research in 2002.