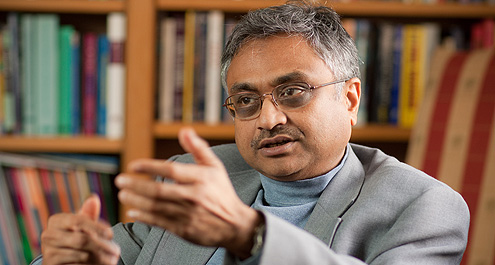 Professor and Chair of Communication Ananda Mitra: Don't call “Slumdog Millionaire” a Bollywood film or accept it as reality.

Perhaps this year’s biggest surprise cinematic hit is “Slumdog Millionaire,” British director Danny Boyle’s melodrama about a youth from the slums of Mumbai, India, who relives his childhood of danger and lost love through flashbacks triggered by questions submitted to him as a contestant on India’s version of “Who Wants to Be a Millionaire?”. The film, which has been nominated for Best Picture and Best Director, has been compared aesthetically and thematically to the movies of “Bollywood,” India’s prolific and hugely popular Mumbai-based film industry

Ananda Mitra, professor and chair of communication, has written extensively about Indian culture and is the author of several articles on Bollywood. Originally from India, he is the author of the 1999 book “India Through the Western Lens,” which explores how Indians have been represented in films.

“In keeping with the tradition of telling tales about India, from the days of ‘Gunga Din’ to ‘City of Joy,’ Danny Boyle and [co-director] Loveleen Tandan have again successfully mythologized the brown-skinned child as the source of inspiration for people sitting in plush multiplexes of America and lamenting the condition of the downtrodden on the other side of the world,” says Mitra of “Slumdog.” “The directors have updated the surface content of the movie, but it falls into the same genre of movies that have exemplified Hollywood’s look at India.”

What are the principal hallmarks of the Indian cinematic genre known as “Bollywood.”

The term ‘Bollywood’ is a relatively new representation of an industry that has been around since the early 1900s. Movies made in Bombay follow a long tradition of folk culture in India, which in turn is grounded in mythologies like Mahabharat and Ramayan. These texts, like the Odyssey and other Western mythical epics, tell stories of undying love, friendship, loyalty, fantastic adventures, and the eternal battle between good and evil.

Elements of these stories have been acted out in village plays for thousands of years in India, and that tradition has been adapted by the Bombay movies. The famous Bollywood movies of the 1970s, for example, almost always centered around the theme of running children trying to escape from evil by jumping on a train, getting separated, and then living their lives trying to find the lost one. The genre also remains embedded in an Indian convention of inserting dance and song sequences into the narrative of a film.

What accounts for its immense popularity in India?

Bollywood movies are quintessentially Indian because they remind the Indian audience of some of the tales that most Indians grow up with, independent of their language, skin color or religion. The aesthetics of Bollywood movies often incorporate the numerous elements that make up Indian culture-the musical influences, for example, of such diverse traditions as the Hindu temple dance, Muslim Sufi poetry and the operas brought by the Europeans. Recently, globally popular music, as well as Western narratives, also have found a place in Bollywood movies. It is the peculiar and unique intermingling of cultures and art forms that make Bollywood movies and their music so popular for the people of India around the world.

Are there inaccurate stereotypes — negative or positive — of the Indian people and culture that Bollywood films perpetuate?

Part of the problem with stereotyping “Indian people” is their incredible diversity. Even though Hollywood has tried hard to create national stereotypes, India is a country in which one could speak some combination of 21 different languages, belong to one of 10 thriving religious groups, have a skin color that could pass for any shade from white to black, be poorer than the most destitute in the West, or have a lifestyle that would be envied by the rich anywhere in the world.

Most Bollywood movies celebrate this diversity rather than trying to contain it as many Hollywood movies have done. In doing so, Bollywood might be said to advance an accurate understanding of India as a country that has celebrated diversity over several thousand years, and as one that continues to thrive as a place of incredible contrasts that cannot be contained in simple stereotypes.

In what ways can “Slumdog Millionaire” be called a Bollywood film?

This is a curious question, and indicates how popular imaginations develop around specific movies. “Slumdog Millionaire” is not a Bollywood movie by any definition of the term “Bollywood.” Among other things, the movie is not a product of the Bombay film industry; it is the product of director Danny Boyle, and its slim connection with the Bombay industry — in the form of its relatively unacknowledged second director Loveleen Tandan — is being effectively ignored. And its principal actor lives in England.

Still, those who have seen Bollywood films would perceive the ways in which “Slumdog Millionaire” has been inspired by the genre. For example, when the protagonists escape from the goons by jumping on to a passing train, they get separated, and much of the ensuing narrative focuses on bringing them back together. This cinematographic trope and the narrative theme dominated the Bollywood movies of the 1970s and hark back to the Indian mythologies in which separation and eventual union was a key narrative component. In that sense “Slumdog Millionaire” is as much a Bollywood movie as any Bollywood movie is a Hollywood movie because of the increasing cross-connections and interminglings of Western and Indian cinematic themes and styles.

What do you think accounts for the popularity of “Slumdog Millionaire” in America?

“Slumdog Millionaire” takes old themes and repackages them for new audiences. But just as “City of Joy” [another film about Indian slum life] faded from popularity after its 1992 release, it would be overly ambitious to think the subject of “Slumdog Millionaire” will do much more than remain popular for a time before fading away until another Western director chooses another slum somewhere else in the world to promote his Oscar hopes.