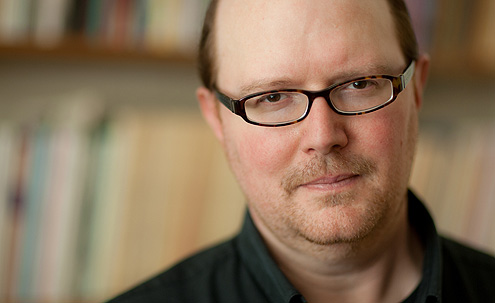 John McNally: “Each of us walks around with ghosts filling our heads, and the older we get, the more ghosts there are and the more they talk to us.”

John McNally, the Ollen R. Nalley Associate Professor of English, has crafted a niche in the contemporary writing scene by concentrating on the short story. The author of two novels and 52 published short stories, he also has edited or co-edited six anthologies of short stories, essays and multi-genre works. A member of the Wake Forest faculty since 2002, he is a graduate of the famed Iowa Writers’ Workshop at the University of Iowa and holds a doctorate from the University of Nebraska. He recently published his second collection of short stories, “Ghosts of Chicago.” The compilation explores what it means to be haunted from the perspectives of a host of eclectic and idiosyncratic situations and actual and fictional characters.

All of the stories in this anthology concern haunting in one form or another. Indeed, each of your anthologies (those you have edited as well as written) has centered on one overarching theme—baseball, high school “losers,” infidelity, men who are troublemakers and others. What comes first, the stories or the theme?

When I edit an anthology (a book compiled of other writers’ work), the theme comes first, because I’m trying to find a marketable idea—an idea that interests me—on which I can hang the entire book. But that’s not the case for my own short-story collections, in which I’m the writer, not the editor. In those instances, the stories come first. “Troublemakers” and “Ghosts of Chicago” each took 10 years to write. When I wrote the stories in “Troublemakers,” I didn’t set out to write a book about men and boys who cause trouble. It was the title of that book that finally gave it its thematic cohesion, after I’d tried out about a dozen other titles.

By the time I was writing “Ghosts of Chicago,” I knew the enormous difficulties of placing a short-story collection with a publisher, and so I was more conscious of needing a “hook” for book, but it wasn’t until about seven years into the writing that I began making connections between the stories.

And then I was given an assignment by Virginia Quarterly Review to write a short story about a dead writer. I chose Chicago writer Nelson Algren. That’s when I found my hook: every other story in my book would be about a dead Chicagoan; many of the other stories dealt with characters who seemed, for lack of a better word, haunted by their own pasts. I spent the next three years filling in the blanks.

You’re a native of the Chicago area, but beyond that, are there any aspects of Chicago’s history and culture that you found particularly pertinent and compelling in exploring your theme?

I’m always telling my students that the way to achieve universality is through specificity. I found this to be particularly true when I began receiving e-mails from people who’d read my first novel, “The Book of Ralph.” It’s set in 1978-79 on Chicago’s southwest side, and I used real places, very idiosyncratic places in some cases, and what I found was that people in Kansas City or Poughkeepsie or Biloxi had their own idiosyncratic places that mirrored my own. When people come up to talk to me about that book, they almost always want to talk about place, even if they’re not from Chicago.

But if they are from Chicago (and especially if they’re from the southwest side), they want to share their own stories with me, stories that are tied to these places, stories that are almost always comic or absurd or violent. Up until now, the history of Chicago that I’ve written about has been primarily my own peculiar history, except for the stories about actual dead Chicagoans in the new book, but even in those cases, I mostly chose people who played some important role in my childhood. I’ve begun writing an actual historical novel set in 19th-century Chicago, and the most difficult part so far has been trying to find myself in it, which I need to do in order to make it work.

Is the inclusion of dead Chicago celebrities—diverse personalities that include John Belushi, George Pullman, Walter Payton, Richard J. Daley, Gene Siskel and Miss Betsy of “Romper Room” fame, among others—a gimmick, or does it serve some larger thematic purpose?

Once I decided to include the dead Chicago celebrities, I wanted them to serve a larger purpose in the book as a whole. Most of those stories are very short—three to five pages, on average—so I began to think of them the way a pointillist might think of a dot on a canvas. My hope is that, when the reader finishes reading the book, they come away with an impressionistic portrait of the city. I wanted the effect to be cumulative, with each historical story giving more and more weight to the book as a whole. I also wanted to play the stories about everyday people off the stories of historical characters, in subtle ways.

That said, I also knew that there is a gimmicky aspect to doing this, and I knew that one, the gimmick would probably mean the difference between a published short story collection and an unpublished one, and two, the gimmick would probably get me some extra publicity in Chicago. I did an interview on WGN-TV in December; one on WGN-radio in October, and the Chicago Sun-Times did a very nice feature story-review of the book. None of this would have happened without the collection’s hook.

Address some of the metaphors you deploy in your stories—for example, the symbolism of the boy who becomes increasingly obsessed with movie monsters as his mother’s pregnancy comes to term.

That’s an excellent question. A young teacher once asked Flannery O’Connor what the significance of the Misfit’s hat was in “A Good Man is Hard to Find,” and she replied, “To cover his head.” I don’t write with metaphors or symbolism in mind when I begin a story, and I don’t know of any writers who consciously do. So, whatever metaphors or symbols appear must come about organically, mostly through revision. It’s my belief that the stories I write are smarter than me. By that, I mean that the first draft of a story comes from a writer’s subconscious (I usually have only the vaguest of notions about a story before I start writing it), and there are often disparate elements that work their way into the story; and part of my job is to make those disparate elements work together in a meaningful (hopefully transcendent) way by the story’s end.

In “Creature Features,” I began with a movie-obsessed boy and his pregnant mother. It wasn’t until very late in the game that I began seeing the “theme” of metamorphosis. If I’d seen it earlier, I probably would have resisted it, because I think symbol and metaphor are reductive ways of looking at literature. I say this from a writer’s point of view, of course. Too many students have been trained to look at stories, first and foremost, as elaborate, mystifying puzzles, which probably explains why so few people read fiction after high school or college (with the exception, of course, of certain genre fiction and bestsellers).

How would you describe your own belief in ghosts?

For me, ghosts are primarily memories. My mother has been dead for 20 years now, but I still feel her presence. When I’m about to do something foolish, I hear her voice warning me not to do it. The memory of my mother, with whom I was very close, is still with me, as are the memories of people who are still alive but, for one reason or another, no longer in my life. In this regard, each of us walks around with ghosts filling our heads, and the older we get, the more ghosts there are and the more they talk to us. As for actual metaphysical entities, I don’t believe in them, but I’m not opposed to ruling them out. As to whether or not I’m haunted…yes, very much so.