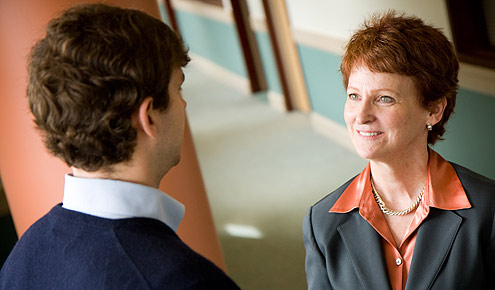 Two weeks before Halloween, the Securities and Exchange Commission again warned investors against buying shares of bankrupt companies. But like those creatures in horror films that rise from the dead, “zombie stocks” — shares of companies that failed during the financial crisis — are on the march.

Take, for example, Washington Mutual and Lehman Brothers. At the end of last year, their stocks traded at 2 cents and 3 cents per share, respectively. With no future earnings in sight, shares of Washington Mutual recently traded around 20 cents, and Lehman Brothers shares have hovered around 15 cents — spectacular gains fueled by what many consider nothing more than gambling.

Critics have called on the SEC to halt the trading of such stocks to protect unsophisticated investors who might be lured into unwise trades. But Lecturer of Finance Sherry Jarrell, who teaches a graduate-level class on investments and portfolio management in the Schools of Business, disagrees.

While Jarrell doesn’t think investing in zombie stocks is a sure-fire profitable strategy, she doesn’t consider it gambling either, because there is an expectation of gain. Jarrell also doesn’t believe those who are trading zombie stocks are ignorant or unsophisticated.

“To outlaw these stocks means that you’ve truncated an avenue for people to express their different risk preferences,” Jarrell says. “If someone wants to go on that haunted trail, let them. It’s not like they’re taking advantage of people on the other side of the trade.”

Washington Mutual and Lehman Brothers lost their standing to be listed on stock exchanges, so traders have to keep up with prices through a quotation service known as the Over the Counter Bulletin Board, which unsophisticated investors are unlikely to access. Other troubled companies, such as Fannie Mae, Freddie Mac and AIG, whose shares are widely considered to be zombie stocks, are still listed on major exchanges. The federal government’s own backing of those companies weakens any argument against allowing individuals to invest in them, if they dare.

One project Jarrell assigns her students to work on is to identify a publicly traded stock they believe the market has significantly mispriced. By definition, she says, the exercise requires the same calculation made by traders of zombie stocks — reaching a different conclusion about a stock’s future cash flows and risks than that of the market.

Jarrell points out that all investments carry a degree of risk proportional to potential returns, and investors have varying tolerances for risk. Some hide from risk; others seek it out. She recalls a study several years ago that found striking similarities in the blood chemistry of day traders on Wall Street and jet fighter pilots. “It turns out they need a certain amount of danger to feel normal,” says Jarrell, who joined the faculty in 1998. “They seek risk in order to feel comfortable.”