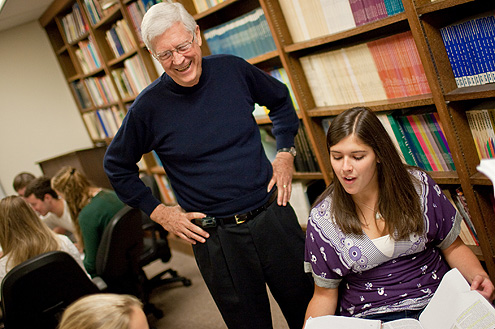 Chuck Longino was a popular teacher and a national expert on retirement migration.

For many years on freshman move-in day, Charles F. “Chuck” Longino would put on his mustard-yellow tee-shirt with “Ask me for help” printed on the front and help new students move into their residence hall rooms. Working alongside facilities-management staff, most freshmen and their parents probably had no idea that he was one of Wake Forest’s most distinguished professors.

Longino, the Washington M. Wingate Professor of Sociology and director of the Reynolda Gerontology Program, died on Dec. 25 in Winston-Salem following a short illness. He was 70. A memorial service will be held in Wait Chapel on March 17 at 3 p.m.

Longino was a world-renowned expert on retirement migration who was largely responsible for discovering the field in the late 1970s. He was the author of the seminal book on the subject, “Retirement Migration in America,” published in 1995.

But he will best be remembered at Wake Forest for his service to students, in and outside the classroom. “He gave from his heart in all the things that he did. It made him an exceptional teacher and a thoughtful mentor,” said Andrea Badillo (’96).

“He was one of the finest teachers I have had at any level,” said another former student, Greg Holloway (’01). “He took a true interest in his students, far more than most people of his stature.”

Longino came to Wake Forest in 1991 after spending 14 years at the University of Miami, mostly in research positions. At Wake Forest, he was expected to teach undergraduates, a change he came to relish. “I’ve never taught in a place where I care as much about the students as I do here,” he said in a 1998 interview.”

Soon after he joined the faculty, he approached Connie Carson, then director of Residence Life and Housing, about having faculty and staff join facilities-management employees and upperclass students in helping freshman move into their residence halls. “Chuck had a joy for life that would just shine through as he met our new students and families,” said Carson, now vice president of student services at Furman University. “His enjoyment of students always seemed to push him to find ways to engage with them in less formal ways outside the classroom.”

Longino also started the now traditional midnight exam breakfast. Working with Aramark Dining Services, every year he recruited administrators, other faculty members and staff to serve a late-night breakfast to students in the Reynolda Hall cafeteria one night during fall and spring semester exams. Although he was too ill to coordinate the most recent breakfast in December, his longtime assistant, Peggy Beckman, carried on in his honor.

He was also a freshman advisor and often invited students to his home for dinner. “He loved teaching and he loved being at Wake Forest because the students were so good and so eager to learn,” said his wife, Loyce Longino. “He felt very strongly that people like himself who had endowed chairs needed to introduce students to education professionally and to really encourage moving beyond just their four-year degree. He really loved that mentoring part.”

Kelly Nesbitt Shiflett (’94) said that Longino made a special effort to get to know his students. “His level of care for his students and his passion for teaching sociology made him one of my favorite professors,” she said.

“For me, Dr. Longino epitomized the ‘constant and true’ part of our alma mater, and he and Loyce made me feel at home, both on campus and at their house,” said another former student, Greg Omland (’98). “He helped me to quickly adjust to living away from home, to navigate the rigors of Wake Forest, and to set myself up well for a strong career post-Wake Forest.”

In the 1970s, first at the University of Kansas and then at the University of Miami, he embarked on the first migration studies using three decades of U.S. Census data. He discovered that retirement migration — the streams and counter-streams in which the elderly move after retirement — affected the flow of billions of dollars and had implications for families, health care providers and local governments.

His findings were especially groundbreaking because it showed not only migration patterns to Sunbelt locations, but for the first time documented subsequent moves, often back to northern states, triggered by declines in health or financial status. His studies regularly generated headlines not only in gerontology journals, but in the mainstream press as well.

“Although Sunbelt migrants represent fewer than 5 percent of the elderly population, Chuck argued correctly that their geographic concentration highlighted the need to understand both the experience of aging in new environments and the triggers encouraging further moves — either back to an earlier residential location or toward adult children,” said Eleanor Palo Stoller, a research professor in the Department of Sociology. “Perhaps his greatest talent was his ability to communicate the implications of his empirical findings to multiple audiences — to other social scientists, to policy analysts and service providers, and to older people and their families.”

Longino also brought his research into the classroom. He taught a freshman seminar on retirement migration last fall before becoming ill. He said he tried to make the subject more relevant to 17- and 18-year-olds by making it about something that they could relate to. “One thing we do is analyze their move to college using some of the same criteria I use for my research so they begin to see mobility in a broader perspective,” he said.

A native of Mississippi, Longino graduated from Mississippi College and earned his master’s degree at Colorado University and his Ph.D. from the University of North Carolina at Chapel Hill.

In addition to his wife, Longino is also survived by two children, Laura and Charles III, and two grandchildren.