“The Poetry of Paul Muldoon”

Associate Professor of English Jefferson Holdridge has written a new book, “The Poetry of Paul Muldoon” (Liffey Press), which examines the works of the Pulitzer Prize-winning poet from Northern Ireland. 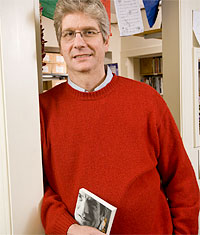 “Because Muldoon is Irish but has lived in the States for many years, and I am American but have lived in Ireland for many years, I felt there might be a meeting ground between us,” said Holdridge, who lived in Dublin, Ireland, for 15 years.

Holdridge earned his doctoral degree from and taught at University College Dublin before joining the Wake Forest faculty in 2002 to teach Irish literature. He is also director of the Wake Forest University Press, the major publisher of Irish poetry in North America.

The Times Literary Supplement of London has called Muldoon “the most significant English-language poet born since the second World War.” He won the 2003 Pulitzer Prize for Poetry for “Moy Sand and Gravel” (2002), a collection of poems that takes him from his native County Armagh in the 1950s to suburban New Jersey, where he now lives. At the heart of the book is an elegy for a miscarried child, and a remaking of Yeats’s “A Prayer for My Daughter.”

Muldoon moved to the U.S. in 1987 and is now a professor at Princeton University and poetry editor of The New Yorker. Some of his other collections include “Horse Latitudes,” “Poems: 1968-1998” and “Meeting the British.”

Holdridge says Muldoon is in the mold of the great Irish poets who focused on international themes. “I came to write “The Poetry of Paul Muldoon” because I was working on a study of landscape in Irish literature and was struck by how ably Muldoon considers this aspect of the Irish tradition within an international frame that includes North America.

“I also had written a book on W.B. Yeats and felt that I wanted to examine a different type of Irish poet. Muldoon’s playfully allusive and highly ironic poetry provided a real alternative to the sublime rhetoric of Yeats. I came to see that Muldoon’s tragic sensibility — his bitter snarl underneath the knowing smile — is what may best characterize his work. This study of Paul Muldoon’s poetry is meant to provide an introductory critical perspective.”