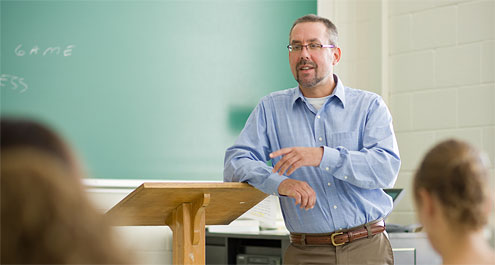 President Obama recently lifted some restrictions toward Cuba — allowing Cuban-Americans to travel there and send money back to relatives and allowing telecommunications firms to pursue business there. But the broader U.S. trade embargo and travel restrictions, put in place in 1962 to bring down the Castro regime, remains in place. Political scientist professor Peter Siavelis offers his thoughts on the embargo, the “Obama Doctrine” of dealing with Latin America, and Obama’s famous handshake with Hugo Chavez. This summer, he is taking a group of students to another part of the world, Vietnam.

President Obama has called for a “new beginning” with Cuba. Is it time?

Absolutely. We are entering a new period in foreign policy. Some say that lifting the embargo would amount to admitting defeat. I don’t think this amounts to admitting defeat. It simply means we acknowledge that the policy has been a mistake, that it has not worked the way we wanted it to. We need to lift the embargo, not without conditions, but in a very careful way that says what we expect in terms of change on the island. We should pursue change by more open means and negotiation. I don’t see a rationale for the embargo anymore. It is counterproductive in the context of the economic, political and cultural changes that have taken place in Cuba and in the world. Some would argue that we need to maintain it for leverage. My response — what can the Cubans give us that we can’t get by simply lifting the embargo?

What has the embargo accomplished?

Fidel outlasted 10 U.S. presidents before stepping into the shadows. The embargo has succeeded in reinforcing his power and the Communist Party. And it has impoverished the island, which is unfortunate. The last time I was there — five years ago with one of the last American educational groups allowed to go — I saw these caricatures of Republican presidents in the Museum of the Revolution located in former dictator Batista’s mansion. For some reason, it was just Republican presidents, even though Democratic administrations have kept the embargo just as tight. One poster showed Reagan with the wording — “thank you for advancing the revolution.” Then it was Bush 1 — “thank you for continuing the revolution.” Then it was Bush 2 — “thank you for consolidating the revolution.” Castro used the embargo to re-enforce that the U.S. was a threat to Cuba. Even five years ago, I had people in Cuba ask me, “Is your government going to invade Cuba? If so, we are ready.” So Castro has used the embargo as a tool to rally support for himself.

It’s an anachronism of the Cold War. It seems to go against reason. The embargo was put in place to force a change in human rights, freedom of speech and religion, and democracy. But other countries have a record on those issues just as bad, but we have radically different policies toward those countries. China is the best example. Much of the rationale for the embargo is tied to U.S. domestic policies, rather than foreign policy issues. If the large Cuban-American population in Florida was in any other state besides Florida, we would have ended the embargo a long time ago. Not only does Florida have 27 electoral votes, it’s the only one of the big four electoral vote states (the others being California, New York and Texas) that is really competitive. The Cuban-American vote is 5 percent of the total electorate in Florida, so they can really tip the state one way or another. Cuban-Americans went overwhelmingly for McCain (in 2008), except for those under 30, so in a sense that gives Obama free reign to make the changes he wants without severe consequences for the Democrats. If you look at those Cuban-Americans under 30, they care more about family reunification and being able to visit Cuba. I’ve seen statistics projecting that in the next 15 years the percentage of Cuban Americans who support the embargo will go from overwhelmingly supportive to overwhelmingly against it. The Cold War politics are a distance memory to those under 30.

Can you make the argument that if we had allowed trade, travel, communications with Cuba, the American influences could have done more to end Castro’s reign than the embargo?

Absolutely. Cuba is 90 miles away and Havana is a short hop of a flight. Imagine the number of Americans going back and forth. How long would it take for this interaction and influx of money to transform things? We’ve seen that happen all over the world. Even with the very limited agricultural trade allowed now, Cuba is our fifth leading trading partner, largely because important agricultural producers have lobbied to be able to sell food to Cuba. This is with severe restrictions and a cash only purchase policy. Imagine the scope and content of trade if the embargo were ended. Imagine how it would transform everyday life on the island and lead people to demand more political change.

Would we be at this point if Fidel Castro were still in power and not his brother?

Certainly Raul Castro is easier to deal with. He said something recently that Fidel would have never said, that “we’re all human, we all make mistakes.” Just this different level of rhetoric ratchets things down a bit. I think Raul is more pragmatic; he knows his level of support on the island is not nearly as high as Fidel’s was. He doesn’t have the same kind of charisma and the revolutionary credentials that Fidel has. Already we’re seeing open levels of disagreement among his top levels of government, which would never have happened before. And frankly I think the reformist wing of his party is just as tired of the embargo as we are.

You’ve made the point before that Cuba overshadows all else in Latin America.

We elevate Cuba to make it our most important foreign policy issue in the Americas. Other counties in Latin America dwarf Cuba in population and economic importance. Cuba has 11 million people; Brazil has 192 million people and is the ninth largest economy in the world. Which country is more important to U.S. interests, both economic and political? Yet, our Cuba policy damages relations with Brazil and other large and influential Latin American political and economic powers.

Historically in Latin America, we only pay attention to those countries when some outside security issue happens to threaten us: if they threaten to go communist; if the drug wars spill over onto U.S. soil; if there are terrorists there. Otherwise, we ignore them. Latin Americans want a more mature hemispheric relationship that treats them like important trading and diplomatic partners. They would like to see a more equitable and balanced relationship. I think what Obama is trying to do is treat Latin American nations on equal terms, and ultimately this will better serve the political, economic and security interests of the U.S. among our natural hemispheric partners.

What did you think about Obama’s handshake with Hugo Chavez?

Let’s look at it the other way. If Obama had snubbed him, what message would that have sent? Can you imagine the controversy then? Chavez is the sovereign leader of Venezuela, certainly elected under questionable means, but he is the sovereign leader. Obama had to go by the basic rules of diplomatic protocol. He would have alienated every other country in Latin America if he had snubbed him. We need to get over this policy of refusing to talk to our adversies. That’s especially true in Latin America. Venezuela is not Iraq or Iran, it’s a neighbor with common interests.

Would do you think will happen next?

I think Obama is going to move even more toward gradually loosing restrictions on travel for everyday Americans and increasing trade, and see how Cuba responds, especially in terms of religious and political freedoms. My sense is that the ability of the hardliners to maintain control diminishes every single day.

How odd is it that you are taking a group of students to Vietnam this summer, and you can’t go to Cuba?

Yes. It is very strange for a Latin Americanists to be going to Vietnam with students. I am certainly no expert on Asia. This is a combined service and teaching trip. So I will be teaching general world political economy and how Vietnam fits into this, but we will also be comparing political and economic change in Vietnam and Cuba (as well as other communist nations). How strange given our violent recent history with Vietnam that we have normalized relations, but we have not yet with Cuba. Maybe my next trip with students will be to an embargo free Cuba and we can compare radical changes there to those in Vietnam. At any rate, one way or another I expect to by lying on the beach in Cuba within ten years.