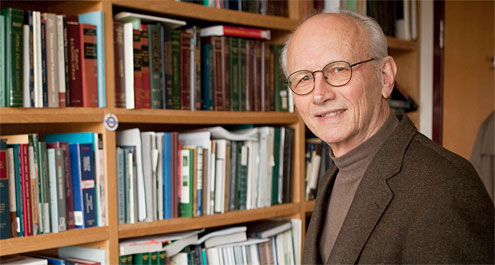 Professor of Law David Shores, an expert in taxation and antitrust law, is retiring this summer after 37 years teaching at Wake Forest. With April 15 still fresh in taxpayers’ minds, he offers some thoughts on the U.S. tax system and the recent “tea parties,” as well as on antitrust law, and he offers some parting words for future students: be prepared.

Is the U.S. tax system too complex?

Yes, the tax system is too complex. It will never be simple. It touches almost every aspect of human activity, and we live in a complex economy. For example, married couples gain a variety of advantages by filing a joint income tax return. An issue currently pending in the courts is whether same-sex couples legally married under Massachusetts law can file a joint return, even though the federal Defense of Marriage Act provides that the federal government will recognize only those marriages that are between one man and one woman. The so-called tax gap — the difference between what taxpayers should pay under current law, and what they actually pay — is huge, estimated at around $300 billion. It was even higher prior to recent efforts by the government to close it, especially by cracking down on offshore accounts and corporate tax shelters. Nonetheless, the United States enjoys about an 85 percent compliance rate, higher than that of many industrialized nations.

Is part of the reason the tax system is so complex is to make it “fairer,” such as taxing different income or different people at different levels?

Yes. For example, under the progressive rate structure, high-income taxpayers are taxed at a higher rate than low-income taxpayers. The theory, which is almost universally accepted, is that one’s tax burden should be related to one’s ability to pay. Yet, progressive taxation makes the system more complex by providing an incentive to shift income from high-income years to low-income years, and from high-income taxpayers (parents) to low-income taxpayers (children). Similarly, the preferential capital gain rate raises issues concerning what type of income qualifies for the preferential rate, as well as other issues. Yet, it has broad public support. The 1986 Tax Reform Act alleviated some of these effects by eliminating the preferential capital gain rate and adopting a flatter (but not totally flat) rate structure. Those and other reforms adopted in 1986 have slowly been eroded over the years. While the system will always be complex, it is much more complex than it needs to be.

And part of the complexity has to do with encouraging certain behavior, doesn’t it?

The tax system is used to achieve a vast array of objectives that have nothing to do with raising government revenue. Many of these objectives, such as encouraging home ownership or higher education, are desirable, but they add to complexity. A recent example of this is the attempt by Congress to use the tax system to claw back bonuses paid to AIG and other corporate recipients of federal bailout funds.

What are your thoughts on the “tea parties” that were held across the country recently?

As the original “tea party” makes clear, tax protesters have been around for a long time. They tend to become more numerous during times of significant change in government policy. While no one enjoys paying taxes, it’s especially aggravating to pay taxes in support of policies with which one disagrees; and when significant change occurs there will always be some who disagree. So, I think it is not surprising that the tax protest movement has gained some strength in the wake of an election that had change as a central issue. After all, a very significant minority voted against the promised change. But, at the end of the day they will pay their taxes as good Americans always have.

Turning to your other interest, what recent antitrust case has had the biggest impact on American business?

The failure of the government to enforce the federal antitrust law with respect to corporate mergers. Many, if not most, of the companies that have become too big to let fail are the product of mergers and other forms of acquisitions. Our current economic difficulties are at least partly attributable to lax enforcement of the federal antitrust law. The antitrust case that is likely to have the most impact on American consumers is Leegin v. PSKS Inc., decided by the U.S. Supreme Court about a year ago. It overruled a 1911 Supreme Court decision that held vertical price fixing contracts unlawful. For the first time in nearly 100 years it is now legal under federal law for a supplier to sell to a retailer on the condition that the retailer resell the product at a price specified by the supplier. As a result, price competition at the retail level is likely to be curtailed with higher prices for consumers. Efforts in Congress to overturn this decision have not yet been successful.

What was the most important piece of advice you tried to impart to your students throughout the years?

Probably the most important message I tried to convey to my students was the value of professional competence, the need to take every task seriously, and to be prepared. The advice often imparted to trial lawyers is that the three most important things to winning in court are preparation, preparation and preparation. I tried to be as prepared for going into the classroom as I would have been for going into court. Hopefully, the message got across to students not so much from what I said in the classroom, but from what I did in the classroom.

What makes Wake Forest a special place to learn and to teach?

One thing that makes the law school a special place is the friendly and supportive atmosphere. Faculty, staff and students all join in to make the experience for each of us a success, and a good bit of fun.

What will you do when you retire?

I expect that I will continue to write for publication; I just completed an article that will appear in The Tax Lawyer, a quarterly journal published by the Section on Taxation of the American Bar Association. I’m thinking about an article on the antitrust decisions of the Supreme Court since the appointment of Chief Justice John Roberts. There have been several, and all have been decided in favor of the defendant. Dissenting in an antitrust decision in the 1960s Justice Potter Stewart commented that the only consistency in the Supreme Court’s antitrust decisions is that the government always wins. It now appears that the defendants always win, with the government sitting on the sidelines; all of the recent Supreme Court decisions have been in cases brought by private plaintiffs.