Jesse Haddock never dreamed he would become a coach when he enrolled at Wake Forest in 1944. The freshman from rural Winterville, N.C., had lofty thoughts of becoming a country doctor until he tackled a science course and didn’t fare too well. “I knew then,” he said, “that I better focus on something in business or athletics.” 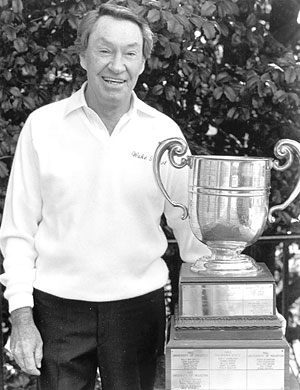 Medicine’s loss was golf’s gain as Haddock (’52) went on to become the most successful coach in Wake Forest history. In a sensational 30-year career from 1962 to 1992, he led the golf team to three national championships (1974, 1975 and 1986) and 15 Atlantic Coast Conference titles. The Deacons won 10 conference crowns in a row from 1967 to 1976, and finished second in the NCAA tourney three times. In addition, his teams won countless regional tournaments and were always major contenders wherever they played.

Dozens of other players became outstanding club professionals at prestigious clubs around the nation. “I wouldn’t be where I am if it weren’t for him,” says John Buczek (’67), pro at the Winged Foot Golf Club in Mamaroneck, NY. “He is one of the most influential persons in my life and career.”

Such fame did not come by chance. When Haddock took over as golf coach from Horace (Bones) McKinney in 1960, he accepted the job determined to produce top quality teams. For him, being golf coach would be a full-time job and an obsession, not a nice title. He vowed to work hard and do what it took to be a winner.

Great teams, of course, need great players. As a student assistant in the athletic department, he saw what the Deacons had accomplished with such talented players as Billy Joe Patton, Arnold Palmer (’51) and Buddy Worsham. He made recruiting his main priority and sought only the nation’s best, sometimes disregarding the recommendations of an avid alumnus or two pushing a hometown kid.

Secondly, he concentrated on establishing a program that would help even the best players further develop their skills. He demanded that classwork – and teamwork – come first, and he politely showed the door to any player that didn’t conform, including observing his strong disciplinary policy.

“I was honest with my players,” Haddock said, “and I expected them to be honest with me. Anything else was not acceptable. As a student, I had learned a lot working with coaches Peahead Walker and Murray Greason, and I wanted to adopt some of their philosophies.”

Two-time U.S. Open champion Strange has been a long time admirer of Haddock. “There is never a day that I don’t think about him and appreciate everything he did for me,” he commented. “I love him like a father. He played a strong role in my career, and I will always be grateful.”

Strange said that Haddock had tremendous coaching assets. “First of all, he was a great recruiter and motivator, and he knew people and how to work with them. He was patient and treated us as students, but he made us walk the line and we admired him for that. He brought us together as a team and a family. Thanks to coach, my former teammates are life-long friends.”

Tim Straub (’89), a former Deacon All-America and star of the last national championship team, is the golf coach at Davidson College. “Coach was a sports psychologist before that term was popular,” he remarked. “He knew which players responded to a pat on the back and the ones who needed a kick in the rear. We always knew where we stood with him and what he expected of us. I try to do the same with my players.”

A classic example of Haddock’s psychology occurred during an NCAA tournament. One of his top players was having a bad day on the golf course and was letting the world know it with his fiery temper. The other players wondered how the coach would discipline the star.

That night when he took the players to dinner, Haddock told the maitre d’ in a voice that everyone could hear: “A table for seven, please, and bring us one high chair.” The players roared in laughter except for the guilty party who, having felt the sarcastic sting, cleaned up his act.

Formerly a walk-on from Canton, N.C., Bill Stines (’84), is golf director at the famed Scioto Country Club in Columbus, Ohio. Like a vast majority of Haddock’s former players, Stines puts Haddock in the genius category and was always amazed at how well he remembered faces and names.

“Coach Haddock made us work hard,” he said, “knowing that there was no substitute for effective daily practices. He especially liked to put us in pressure situations to see if we could handle it. He understood golf, psychology, motivation and good communications and used his knowledge wisely. He was ahead of his time in understanding the mental side of the game, and he pushed players to accomplishments they may never have been able to obtain otherwise.”

Following his retirement more than a decade ago, Haddock found time to do the things he didn’t have time for when he was coaching. He and his wife, Kay, are on the road often, mostly to see his former players in action on the PGA and Champions Tour. At a recent Greater Hickory Classic, he spent two days with Jay Haas, who won the event, Strange, Wadkins, Joe Inman, Jay Sigel (’67) and Leonard Thompson (’70).

“I will always have a place in my heart for the guys who played for me,” Haddock admitted. “I stay in touch with them and follow their careers with pride. We are a close, caring family.”

An admitted “hacker” on the golf course, Haddock, 80, now has time to “hit a few balls” and play a few holes at Forsyth Country Club in Winston-Salem, and at Grandfather Golf and Country Club in Linville where he has a second home.

He has few hobbies other than golf and staying in touch with “his boys.” He talks often to Wadkins, Strange, Haas, Hoch and others. “I’m proud of the fact that they have given generously of their time and money to the Wake Forest program,” Haddock said. “That shows the quality that I looked for when I recruited them.”

He’s also a big Arnold Palmer fan. “He was a Godsend to our program, and I have always appreciated that,” he said.

Haddock still follows Wake Forest athletics, but does he miss coaching? “I don’t miss the day-to-day grind, but I do miss the close association with the players. It was heartwarming to see them improve and become tough competitors, because I knew they would also do that in life.”

Haddock first enrolled at Wake Forest in 1944 but was drafted by the U.S. Army after a year. He returned in 1947 and received a degree in business in 1952. As a student, he performed a variety of chores in the athletic department and quickly caught the eye of Athletic Director James H. Weaver. He became Weaver’s assistant following his graduation.

When alumnus Bill Gibson became AD in the early ’60s, he asked Haddock to take over as golf coach on a full-time basis, thus creating the beginning of a dynasty that ranks with the most successful in college athletics. He won his first ACC championship a year later and the venerable coach never looked back.

Jesse Haddock was, indeed, a winner.

Bill Hensley (’50) is a retired sports writer and a former director of sports information at Wake Forest.