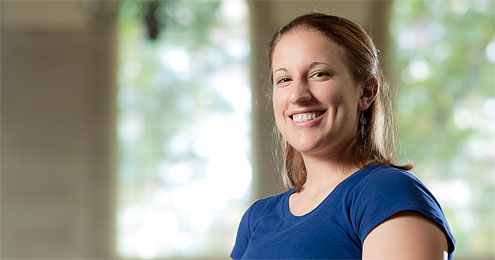 As a volunteer with Mothers for Justice, senior Mary Little supports women in the Winston-Salem community who are struggling to negotiate a complicated justice system. She advocates for women who are dealing with the repercussions of a loved one’s violent death or incarceration. “These women have little voice and no power,” says Little, a religion major from Marion, N.C. “They are often distressed, frustrated and confused.”

Community service-advocate Lyn Warmath-Boyd founded Mothers for Justice. Little met Warmath-Boyd through a pre-ministerial internship* offered by the Chaplain’s office and the two developed a strong bond. Initially, she wrote grant proposals and did other small things for the fledgling organization. Soon, however, Warmath-Boyd introduced Little to the “collateral victims of crimes” — women who face intimidation and discrimination with little understanding of the justice system and no influence.

“One woman I met, whose spouse was incarcerated, learned that her husband had been transferred to a facility on the coast almost eight hours from Winston-Salem,” Little explained. “Her finances are tight, gas is expensive, and she works full time. How can she travel 16 hours round trip to visit her spouse? As her advocate, I visited with the prison superintendent to ask for information on why the transfer was made and to see if it might be possible to move the inmate back to a closer facility. I listened to both sides and learned as much as I could. My job isn’t to force the superintendent to make a change, but rather to share the victim’s family’s concerns with the superintendent and the superintendent’s concerns with the family.”

Studies show that family support is critical for inmates re-entering society after incarceration, but the justice system often considers mothers and wives to be guilty by association.

Little thought that she might be able to bring awareness to the struggles these women face by telling their stories. She sought permission to interview and document the stories of several of the women as an honors project for her religion major. To protect the women’s privacy, she wrote about them in narrative form and gave each of them names of strong women from the Bible.

“I became truly invested in the project, and it changed me,” she said. “I walked a fine line between a rational approach and an emotional approach. The theoretical literature I was reading and the stories these women told were often very different.”

Little has meet with Winston-Salem Chief of Police Scott Cunningham. Her study of victim assistance services led to questions about how Winston-Salem might initiate programs to help the wives, girlfriends and mothers of offenders. “Most victims’ assistance programs focus on justice for the victim of a crime, but offender’s families also need assistance,” Little says. “There is no one in the Winston-Salem Police Department to address victim assistance concerns, and that’s one thing I’m hoping will change.”

Little, the daughter of Stephen Little (’73, JD ’77) and granddaughter of Virginia (’45) and Dewey (’47) Hobbs, credits Wake Forest with supporting her efforts and giving her the skills needed to pursue her goals. “I feel extremely comfortable speaking in public, presenting my findings and advocating for justice. I’m hoping to continue working with Mothers for Justice and offering support to the Winston-Salem police department before I head to Boston University’s School of Theology to study for my masters in divinity in 2010.”

*Internship sponsored by the Pro Humanitate Center and funded through the Lilly Endowment and the Mundy family.