Living happily ever after 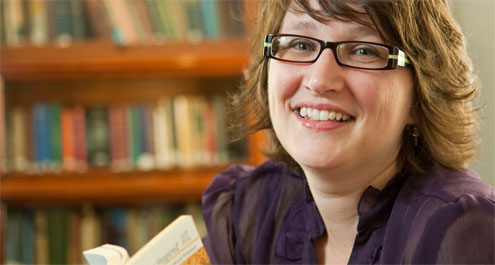 Assistant Professor of Religion Lynn Neal is the author of “Romancing God: Evangelical Women and Inspirational Fiction.” She presented a paper, “The What and Why of Christian Romance Novels,” at an interdisciplinary conference held at Princeton University in April. The symposium was the first national conference to focus on the multiple ways that romance novels provide rich critical insight for the study of American culture, politics and society.

What defines a romance novel?

Generally, it’s a plot that features the troubles and eventual triumph of romantic love. Traditionally, this meant a novel that chronicled the romantic tribulations of a hero and heroine and ended with a happily-ever-after marriage. However, as the romance genre continues to grow and diversify, this definition may need to change or be adapted.

Did romance novels always have a bad reputation?

Warnings against romance novels date as far back as 1566. In American culture, fiction, especially women’s fiction, has long been seen as a corruptive and dangerous force. In the 19th century, women were thought to be susceptible to the powers of fiction and were urged not to read it, but read it they did. Our culture’s deeply entrenched stereotype of romance novels and their readers reflects a deep-seated anxiety about the relationship between women and sexuality and how women use their leisure time.

Harlequin, the largest publisher of romance novels, publishes over 120 titles a month, they are sold in over 100 international markets and published in over 25 different languages. More than one third of American women have read a book published by Harlequin. The sheer popularity of this company alone demonstrates why we should be studying romance novels.

So how did one of the most ridiculed forms of fiction become an area for scholarly research?

It is only in the past 30 years that scholars have started to examine this much maligned but popular genre. In the 1970s, the rise of feminism shaped scholarly questions and research about the role of women in history, literature, politics, and society.

And romantic fiction can reveal something about these topics?

First, they show us that women are socialized to expect and find fulfillment in marriage. (An understanding also affirmed in any number of films that we label “chick flicks.”) Second, they provide insight into how views on romance, gender, and sexuality have changed and continue to change over time. Romance novels written in the 1970s are very different from those on the shelves today. Third, they offer information about women as both consumers and producers of consumer culture. Though romance scholarship remains suspect to some in the academic community, progress is being made toward building a well-respected body of knowledge and the conference at Princeton is evidence of this.

What was most rewarding about the conference?

One of the best things was what was missing. I did not have to defend the topic of my research. Often I have to wade through a barrage of stereotypes and criticisms of the genre before I can even begin my presentation. It was a welcome change. At this conference scholars from diverse fields and backgrounds came together to share a desire to advance the study of romance novels, a respect for various disciplinary perspectives, and a realization that we can learn much about American culture through romance fiction. I was glad that religion was included in the discussion and excited to be part of a panel that focused on the relationship between religion and romance.

Your research focuses on the Christian romance reader. Who is she?

The audience is generally white, married, evangelical Christian women between 25 and 55. However, in the course of my research, I discovered many women who were younger and older than this range reading romance novels. It is a powerful niche market. In the vast romance publishing industry, which is the largest and most popular in the book market with annual revenues over a billion dollars, Christian romance novels have 6 percent of the market.

In Christian romance novels, the romance depends upon the spiritual element of the storyline. In mainstream romance novels, distrust, jealousy, or a misunderstanding keeps the couple apart until the novel’s resolution. In a Christian romance novel, the obstacle that keeps hero and heroine apart is spiritual — one of them needs to convert to Christianity, to forgive a past wrong or to obey God’s will. Only when both hero and heroine are right with God can they be together. However, while they have different foundational points, both Christian and mainstream romance novels are similar in their emphasis on women, love and a happy ending.

What characteristics do the hero and heroine have in romance fiction?

Heroes and heroines are very similar in both Christian and non-Christian romances. Heroines are strong, independent, smart, and a little bit flawed — a heroine that is too perfect will turn readers off — while heroes are handsome and adventurous, yet trustworthy. The main difference between Christian and mainstream characters revolves around the issue of inspiration. Mainstream romance novels are written to entertain and encourage. Christian romance novels entertain and encourage, but also serve a didactic purpose — they are meant to convert one to Christianity or to help readers grow in their Christian faith. As a result, the actions of the hero and heroine take on additional religious meanings in the Christian romance.

In the 1970s, romance novels in general tended to feature dominant and aggressive heroes coupled with weak, subservient heroines. However, in more recent years, most romance novels, including many Christian ones, have challenged this and written about more egalitarian relationships. Christian romance novels emphasize equality before God and promote mutual love and respect, not relationships based on domination and submission.

Of the Christian romance authors, who is the most popular?

In my research, one of the most popular authors is Francine Rivers and her book Redeeming Love. Numerous readers cited her book as their favorite. It had well-developed characters and an intriguing storyline. For many, it helped them understand the biblical account in a new way as it used the love story between the hero and the heroine as a way to underscore the Christian message of God’s unconditional love. For readers that I talked to, the book helped them understand and feel God’s love in a new and powerful way.

You offer a first-year seminar where students explore the romance novel. What do they learn from this?

By reading both a Christian and a mainstream romance novel, students are forced to evaluate and assess the power of stereotypes (about romantic fiction, about readers, etc.). For example, I have students purchase a romance novel to read and this experience acquaints them very quickly with the stereotype’s power. Reading this genre also makes students consider more fully how gender socialization influences our relationship with and opinion of certain types of literature. Perhaps most important, the comparison helps students think about how religions use popular culture forms as a way to disseminate and encourage faith.

What is your next step on the research front?

I’m interested in exploring whether mainstream romance novels “inspire” readers in ways similar to the Christian romance novel. Another of my research interests is religious intolerance in the United States, and while my research on romance novels is quite different, both are connected by my interest in the exploring the power of words, stories, and narratives and how they influence our lives.

Romancing God: Evangelical Women and Inspirational Fiction, by Lynn Neal, is available through the University of North Carolina Press.